Final Leaders Are Coming In Loud And Heavy 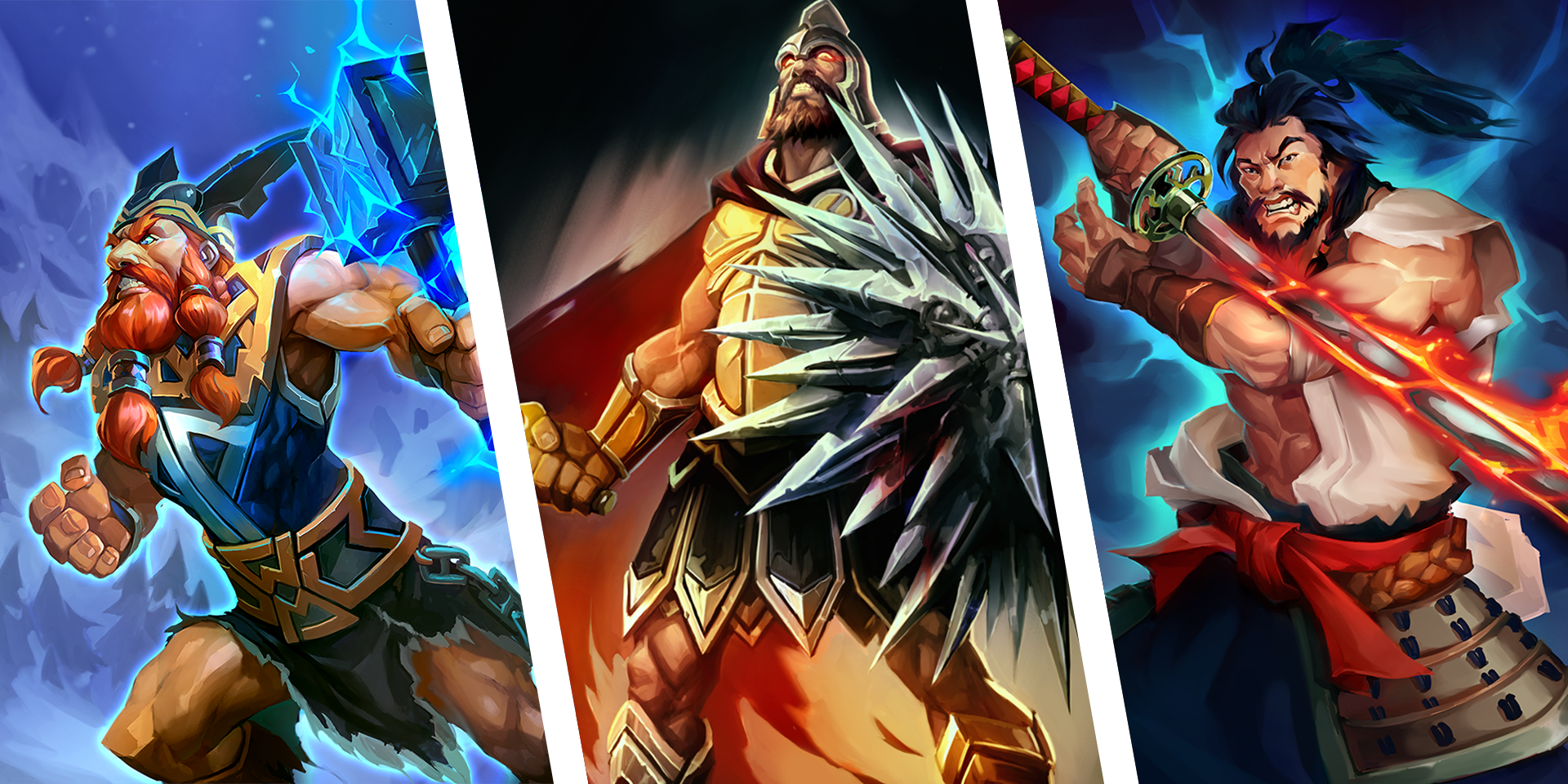 Sometimes reading the signs from the gods can be tricky business. The clouds in the sky, a crow on the tree, a fly in the soup – even the little thing can mean so much when you need advice from the gods. The final three leaders, that will enter World of Myths before our Early Access on Steam, bring the thunder and the clash of weapons wherever they go and they never let their presence unnoticed. Ain’t nothing subtle about these characters – they’re coming at you loud and intense, opening up possibilities for aggressive play style and putting constant pressure on your opponent.

If You Want War, Prepare For War

This doesn’t sound quite right, but the Greek god of war wouldn’t care. Ares – the God of War, Violence, and Bloodlust is here and ready to roll. The battlefield is his home and the clash of weapons is his anthem – you’re either ready for his charge or you’re down before you know it. With Ares on your side, each opponent will be a mere snag between you and the victory. As the newest leader in the Greek Mythology in World of Myths, Ares is encouraging the players to be aggressive and to engage the opponent in every single turn. But use his abilities well, for his thirst for blood cannot be quenched. Ares is a mighty ally, but if you take a passive approach – your units will pay the ultimate price. 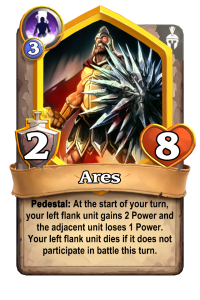 Many warriors pray before Ares for support and guidance in preparation for battle, but Ares doesn’t answer every prayer favorably. He isn’t quite fond of pathetic weaklings who make no difference in the fight. The more fierce and epic the battle – the better! To gain Ares‘ favor, we have included some pretty brutal creatures for you to add in your army. Such a creature is the fearsome Kottos – the leader of the Hecatoncheires. This massive giant with 50 heads and 100 arms was strong enough to take on Olympian gods. With his overflowing strength and unspeakable rage, Kottos can be nearly unstoppable under Ares’s guidance. With him at your side, your opponent will have to choose – either to engage many units in defense or take a massive blow to their temples. And if your rival attempts to match the might of Kottos, you can always rely on the Priest of the Melee to provide you with that extra push to overwhelm the enemy defenses. 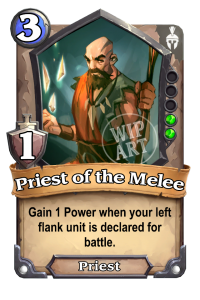 Ares’ thirst for battle is insatiable – fight after fight, he does not rest and does not cool down. He is here to claim the victory. If that is your plan, then Ares is the leader for you. With the destructive power he lends you and the right positioning, you can be a menace for any foe. No negotiations, no restraint, no mercy. One small victory is not enough. If total domination is what you аre after – Ares is your guy.

Let’s Get Ready To Thundeeeeer?

He is one of the most beloved Norse gods. He is one of the most popular, most worshiped and most fearsome of them all. He brings lightning and thunder wherever he goes and many Viking sailors offered sacrifices to him, for they knew it’s wiser to keep him pleased. He is Thor, the God of Thunder! Thor might not be the most hot-headed deity of the bunch, but he ain’t Marry Poppins either. With the power of lightning of his side and his mighty hammer Mjölnir, the tales of his deeds are well-known across the Nine Worlds. Winning victories on the countless battlefieldс, Thor was always the first in line to crush the enemy. 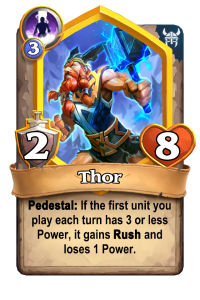 When you choose Thor as your leader you will have the opportunity to attack relentlessly every single turn. The persistent aggressive approach and the constant pressure will let you be the one choosing the tempo and put every opponent on the spot. Your foes will need to either adapt or fall under the hits of Mjölnir. And with an army worthy of Asgard at your disposal, no enemy will be too hard. The Raging Berserker can be a mighty ally under the patronage of Thor. He will not only negate the downsides of Thor’s ability but also make any attempts by your opponent to reduce his power useless – he will only get stronger and stronger. But alongside the ruthless Viking warriors were also vicious beasts, such as the Tamed Direwolf. These unflinching creatures were there to terrify the enemies and also to watch their masters’ backs. With tireless units such as these, your victory will be swift and undisputed. 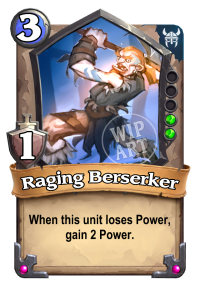 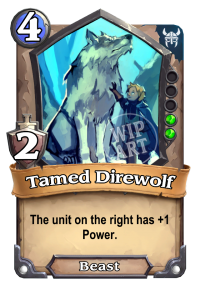 Do you hear it? The raging thunder is coming close. Do the wise thing and put your faith in Thor. Let your opponents know that you have the power of lightning on your side and bash their temples to rubble. Claim your victory with a few rapid swings of Mjölnir and watch as your opponents crumble to dust while your warriors chant your name and charge into the next battle.

The Shinto temple is a quiet place. A place, where you can give your mind and soul a rest. A place of serenity and tranquility, resembling the harmony of the Plain of High Heaven itself. But the heavens are not always peaceful and bright. At times, stormy clouds overshadow the sun and the conflicts between the gods can be heard all across the land. And the culprit is almost always the same. Susanoo – the Shinto god of the sea and storms – is the brother of Amaterasu and Tsukuyomi and he had the worst temper of all Japanese deities. Now he is here, in World of Myths to show his enemies he is no pushover. Even if the odds are not in your favor, Susanoo can lend you enough strength to push through the enemy lines and storm the opponent’s temples. 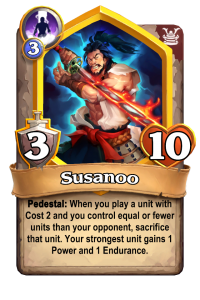 With his impatience and angry outbursts, Susanoo was constantly arguing with his sister. So much so that he was banished from the Heavens for his insolent behavior. He had to prove his worth by overcoming the greatest of challenges and he succeeded. By fighting under his banner, you will be given the same ability – to overcome the odds and fight fiercely even if it looks like you have no chance. The fewer units you have at your side of the field, the stronger they will get. When it gets tough, the Bushi Ambusher is here to help you with the challenge. He is an experienced warrior, ready to engage as many opponents as possible. Obviously, when you’re overwhelmed by the enemy forces, it’s time to pull out the big guns. And there is no one bigger than Oda Nobunaga himself, one of the greatest Japanese daimyō, infamous for sacrificing thousands of people to achieve his goal. Nobunaga was so powerful and ruthless that rumors of him being not a man, but a demon, spread rapidly across the land. As he joins the field, he will force you to sacrifice all other units, but deal a devastating blow against the opponent’s temples. 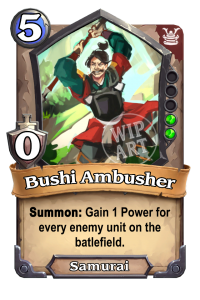 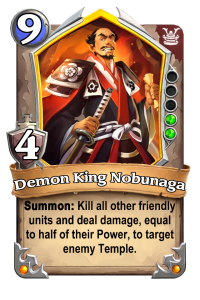 If you prefer playing with few powerful and tenacious units rather than swarming your field with creatures, Susanoo is here to give you a hand. Armed with his deadly totsuka sword, he is ready to help you slay huge monsters and crush whole armies without ever feeling at disadvantage for the smaller size of your army. Don’t hold back, unleash your wrath towards the enemy and this storm can be unstoppable…

Now that we have covered all of the 4 Leaders that each Mythology in World of Myths is getting at the start of our Steam Early Access, it is time to focus on the next Mythology entering the glorious battles in World of Myths. The MesoAmerican is joining the game after fierce community voting. Sacrifices, undefeatable Gods, new Leaders, new mechanics and much more will be covered in the next blog post coming soon.