The King is Dead, Long Live the King – the HUGE update 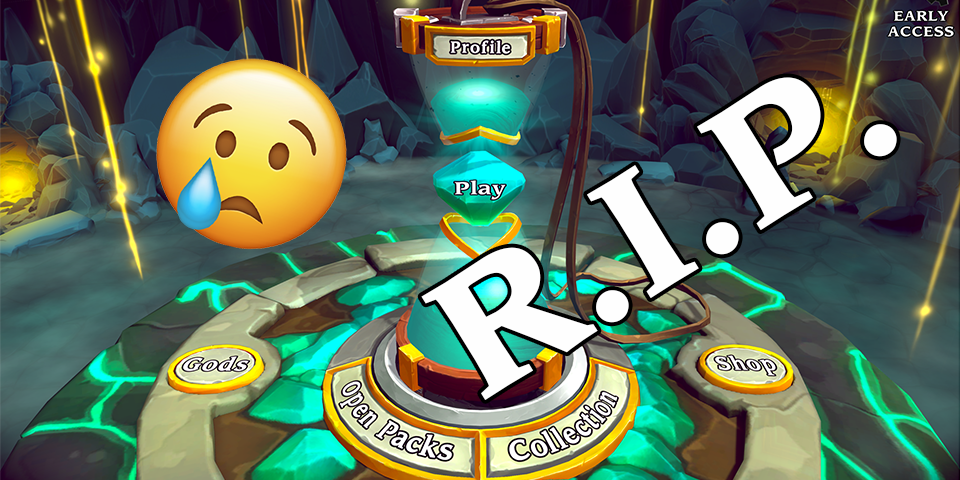 Our latest update had so many changes packed up, that it deserves its own blog post. We added so many new things and improved others that we even referred internally to it as WoM 2.0. We are saying goodbye to our beloved Hourglass on the main menu. You’ve been a great friend Hourglass!

Even though the update is exciting and fantastic, there’s something even more excitinger and fantasticker (totally real words) just around the corner! Thanks to the community vote, the next Mythology joining us will be the Egyptian one!

The Egyptian Mythology will come with 4 new playable Leaders. We will start releasing more information on them and their playstyle in the upcoming weeks, so stay tuned!

But that is not all! No, no, sir! A wild new spell type has appeared! The Upgrade spell type! These spells can target only Temples and will grant both positive and negative continuous effects, that will persist, as long as the Temple stands!

WoM 2.0 brings not only huge changes to the game’s menu UI, but also improvements to many of the progress systems! Let’s go through the reasons for each change, starting with the main menu:

When we first started working on World of Myths, one of our main UI design pillars was immersion. We wanted every bit of the UI to be part of the story and to make sense. We used the Hourglass (used to travel back in time and help the Old Gods) as a “Seed”, or a starting point and built our UI around it. Each grain of sand in the Hourglass was a card that you can collect. You could zoom in the sand and see your collection of cards. You could break a Card Pack in a mechanism below the Hourglass to charge it with new grains of sand a.k.a. cards. Your profile was a drawer in the upper part of the Hourglass and so on… Everything felt natural and we spent a lot of time brainstorming and making the whole thing look as it did. So if everything was so great – why change it? There are three main reasons that made us reconsider: 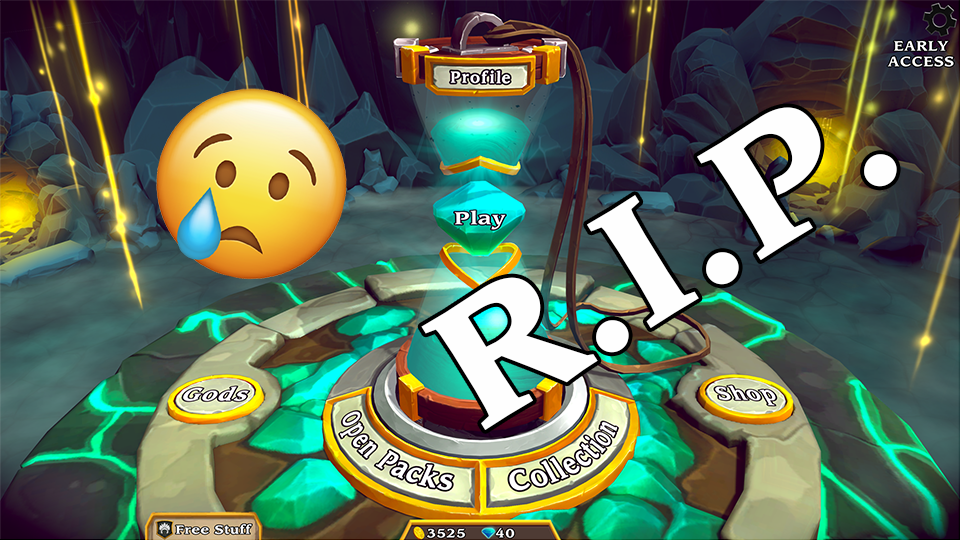 And here it is, your brand new home screen: 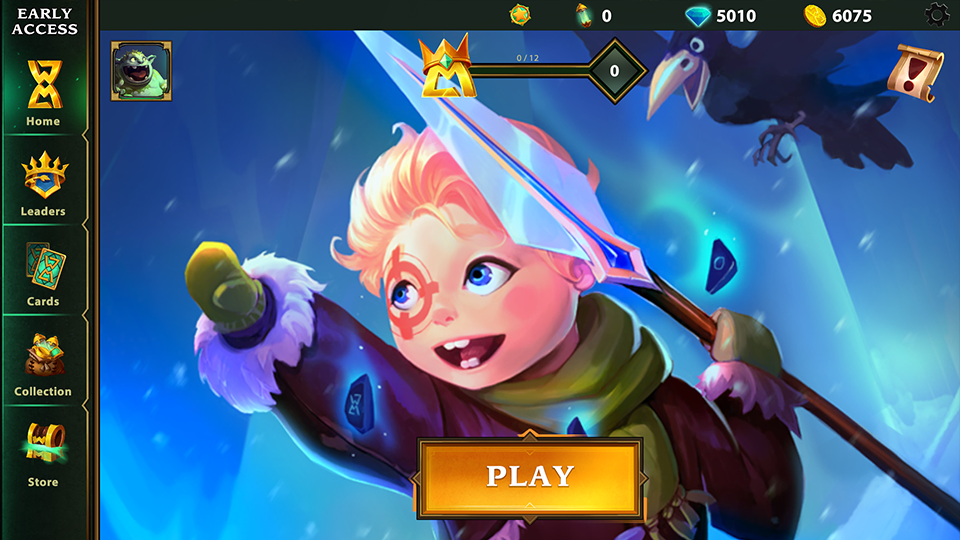 You will now get to enjoy the image of your favorite Leader extended to its full glory. The image will change automatically based on your most played Leader recently.

We are adding a proper Player Profile screen accessible from the (currently) Chubby Stone-Eater icon on the top left of the screen. We’ll be introducing more icons for you to choose from as we progress! You can now check your stats and performance like Total Wins, Wins per Mythology, as well as your recent games – your opponent, the leader they played and the winner of the match.

A big part of that screen is the Player Experience bar. We are removing the separate Mythology Reputation from the game and your current progress will be merged into Player Experience. If you have missed any unique rewards on the way – like a Card Back, those will be added to your account. We believed Mythology Reputation was going to be a vital part of the engagement with the game and bring a sense of identity for each player. It turned out that most of the time it is confusing and set limitations to players. At the end of the day, we moved to the already proven model of Player Progress Experience.

The maximum Player level that you can get at the moment of this writing is 100. 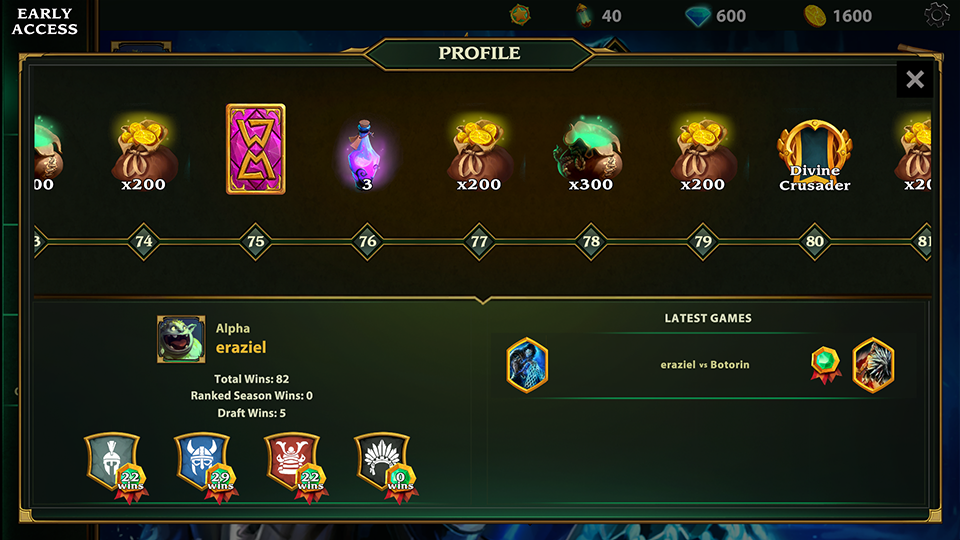 We are extremely excited to present our brand new feature – the Myths Pass! Now you will gain even more rewards while playing.  Here’s how it works: 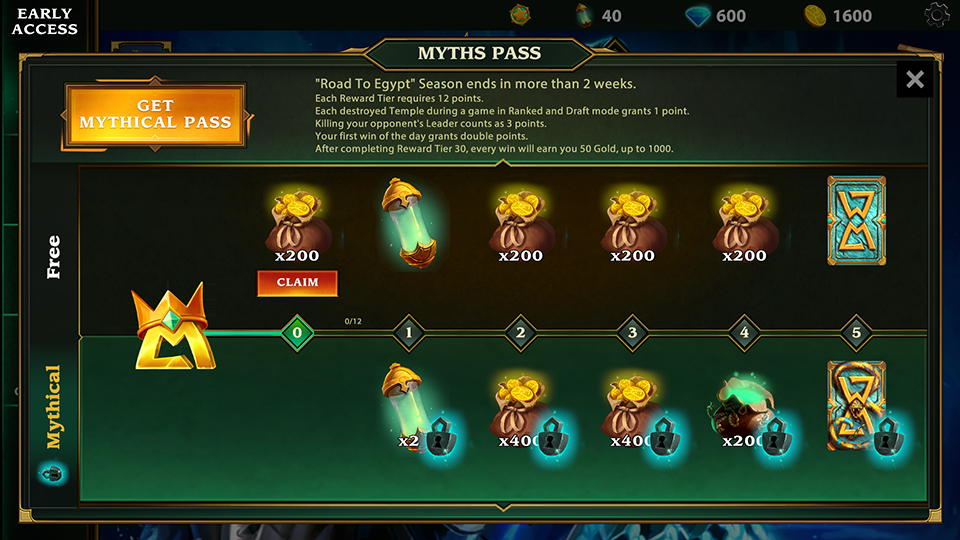 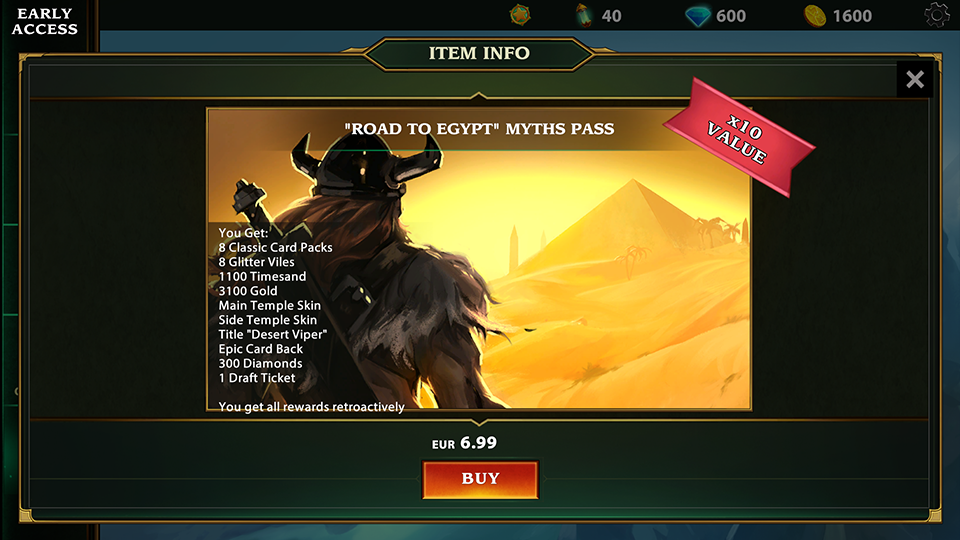 As this is our first iteration of a Battle Pass, we are eager to hear your feedback and improve on the next one! 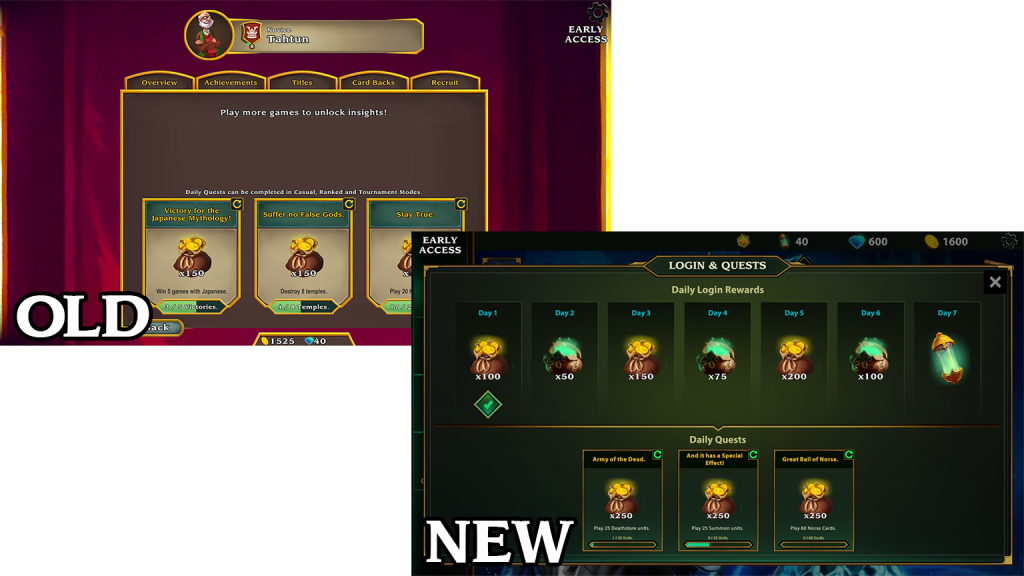 The ranked play was another system in World of Myths that required our attention. So far you were climbing different ladders with each Mythology. We thought that this will let players experiment more freely with decks that are not from their main mythology and lead to more diversity. Again it proved that’s not the case and instead, it was confusing and had a negative effect on the experience. We have now unified all ladders into one single ladder. All players will keep their highest ranking and get rewards for all secondary mythologies they have ranked!

We are also adding the Grand Master rank into the game, which is an infinite level above the Master rank. There will be small rank drops/resets every month and larger ones every 3 months when the seasons will end. 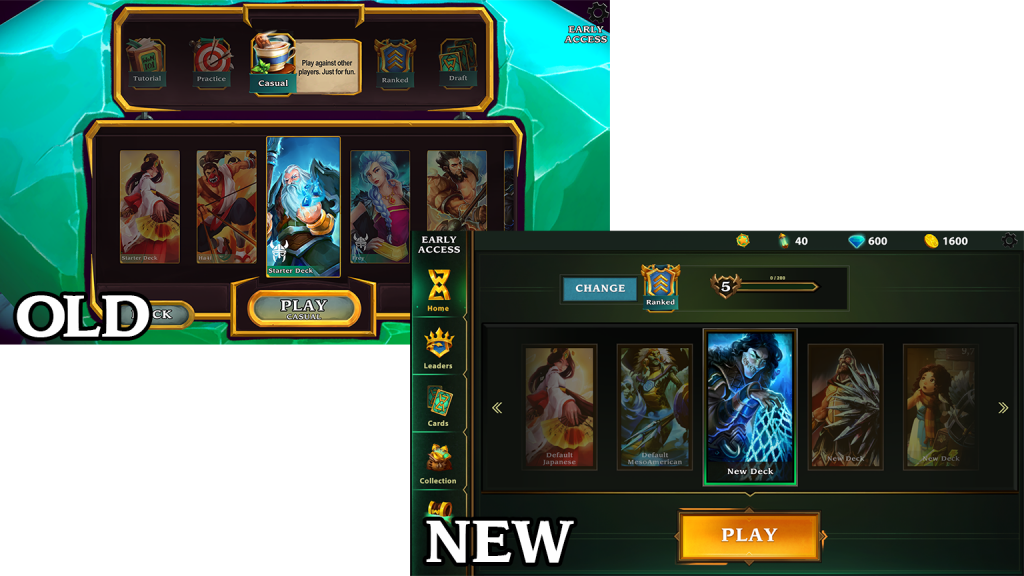 As we are removing the Mythology Reputation, a new question arises – “How would a player unlock Leaders then?” Question no more! We are now introducing Leader Challenges. They will act like small puzzles you’ll need to solve. To unlock a Leader you have to complete all 3 of his challenges. As a starter, only the first out of 3 challenges will be scripted but we will improve the other 2 on the go. Those Challenges will also add the next bits of Lore of World of Myths, so read carefully 🙂

The active Mythology will now be chosen from the Leader’s screen and will be used only for Daily Quests and Draft Mode. 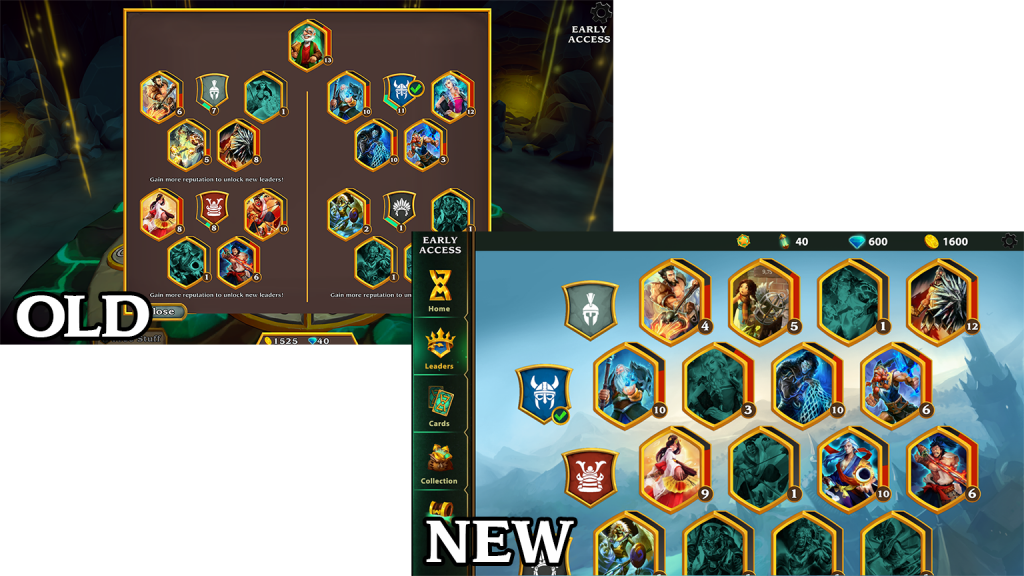 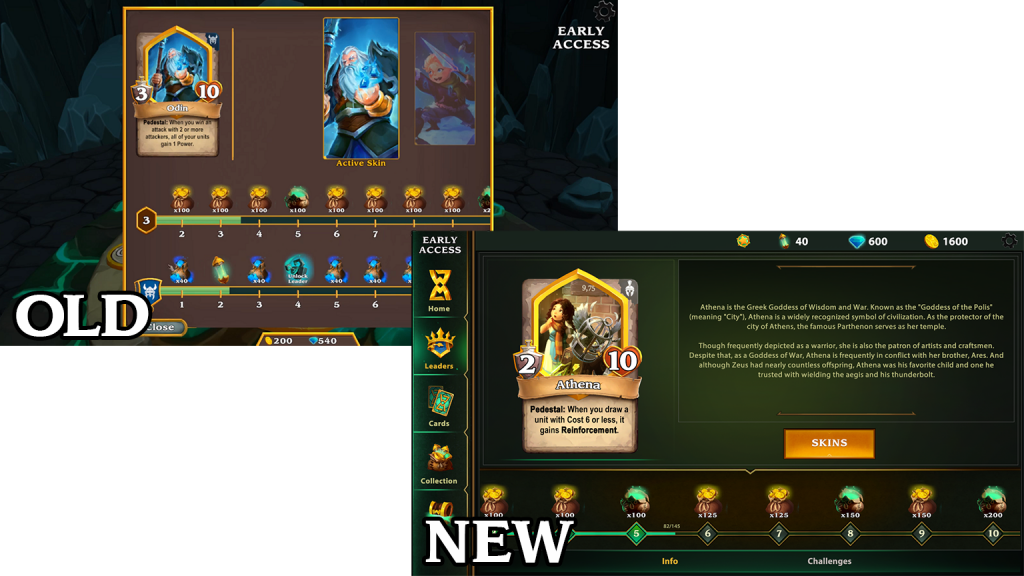 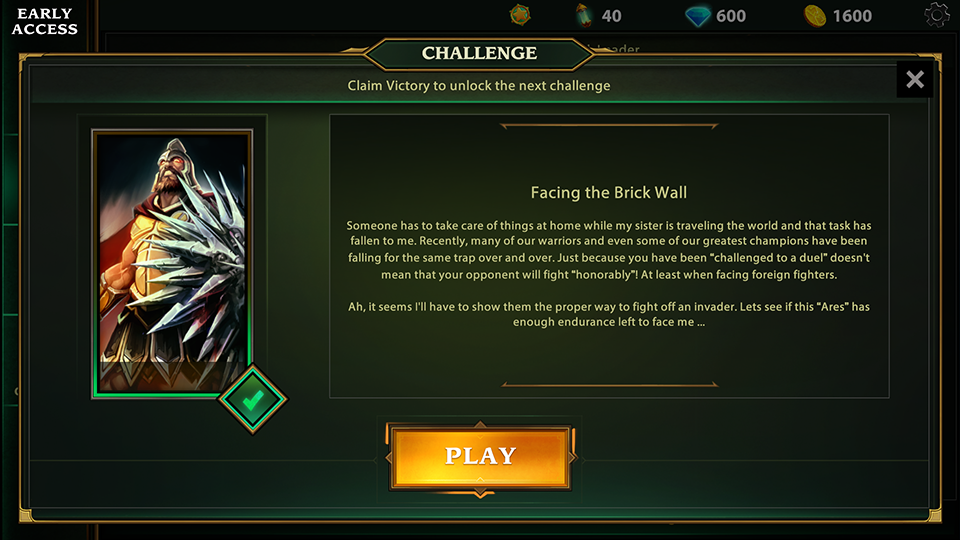 You will now see 8 cards instead of 6 on the Cards screen and the filters were moved to a separate modal! We’ve also added a new resource to the game – “Glitter Vails” that will be used for creating animated cards! 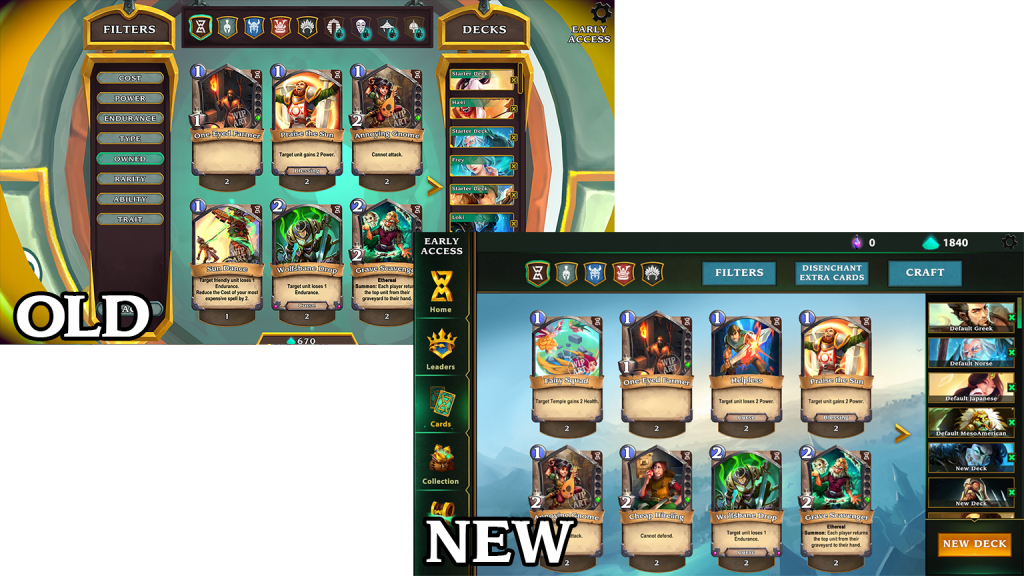 We have removed one of the steps of the deck creation process and added a short description on each Leader to give some brief intro to the Leader playstyle for new players. 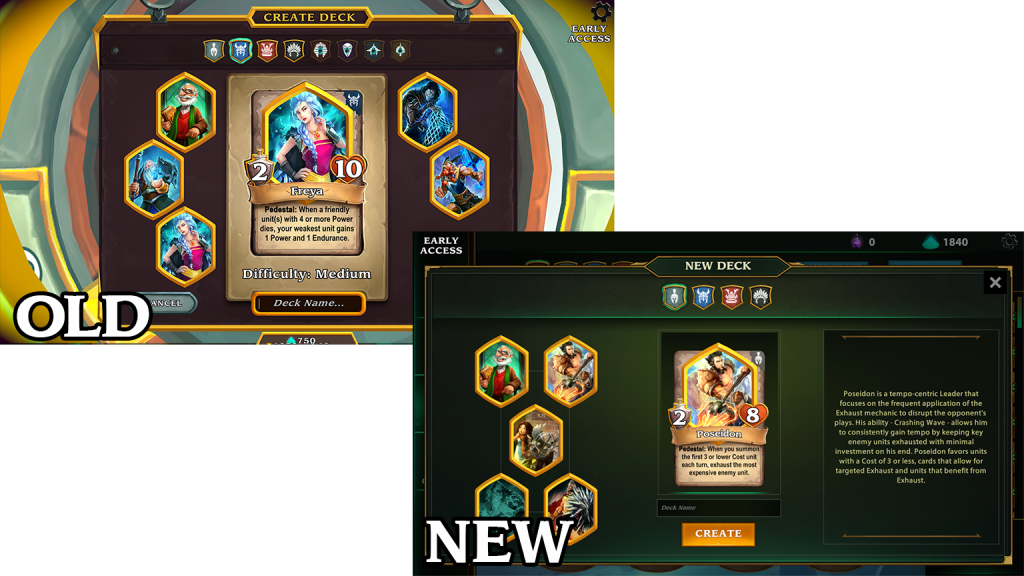 We are adding a brand new screen called Collection. You can open your Card Packs, see your Achievements and customize all visuals in the game from here! We have improved the skins screen and now you will see your favorite skins bigger and better. You will now be able to customize the Temples and Trophies you play with! 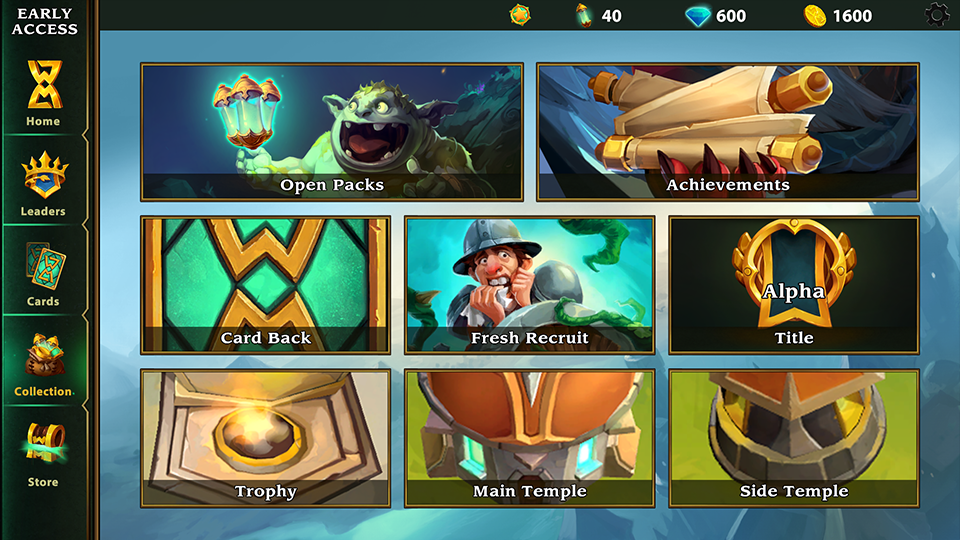 We have also added a short description and info on each skin and title you can use. 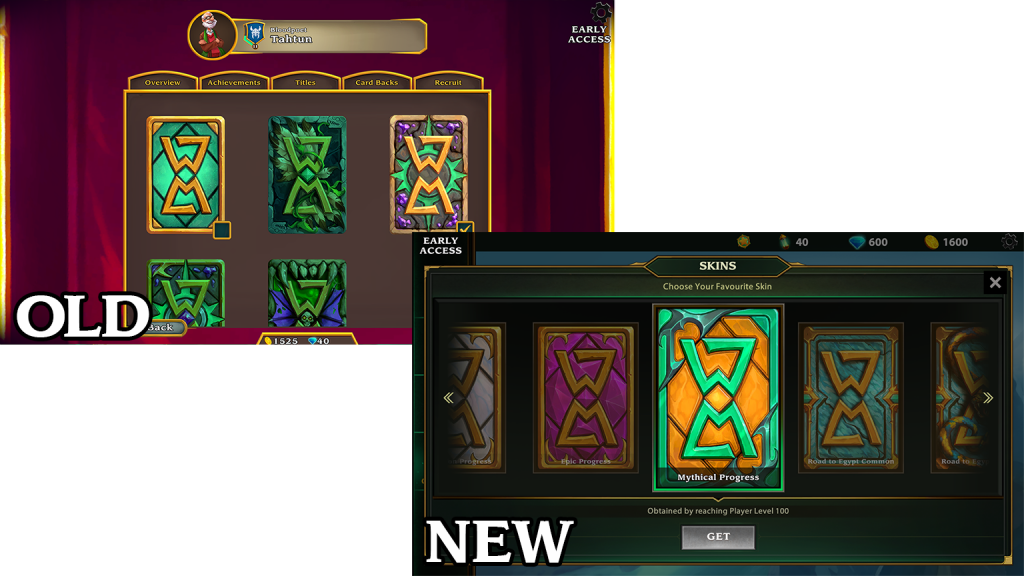 There are many other small changes and improvements. We will continue to work hard and improve the new menu UI. Feel free to share your feedback. We hope you enjoy the changes as much as we do!

The next updates will be focused on balance and game changes. We will also be adding a set of new cards by the end of the year. Meanwhile, you can head up to our new Store and check the Pre-Order offers we have on Egypt. 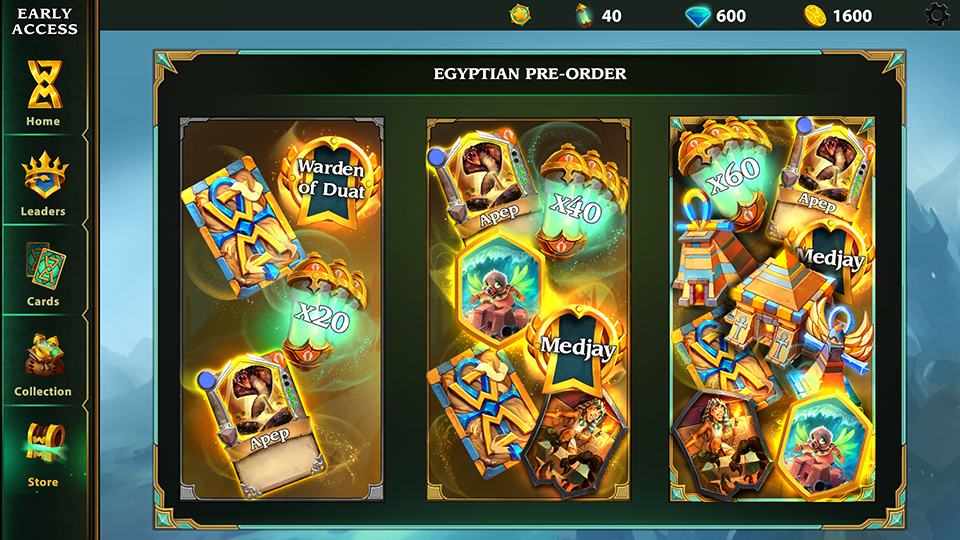