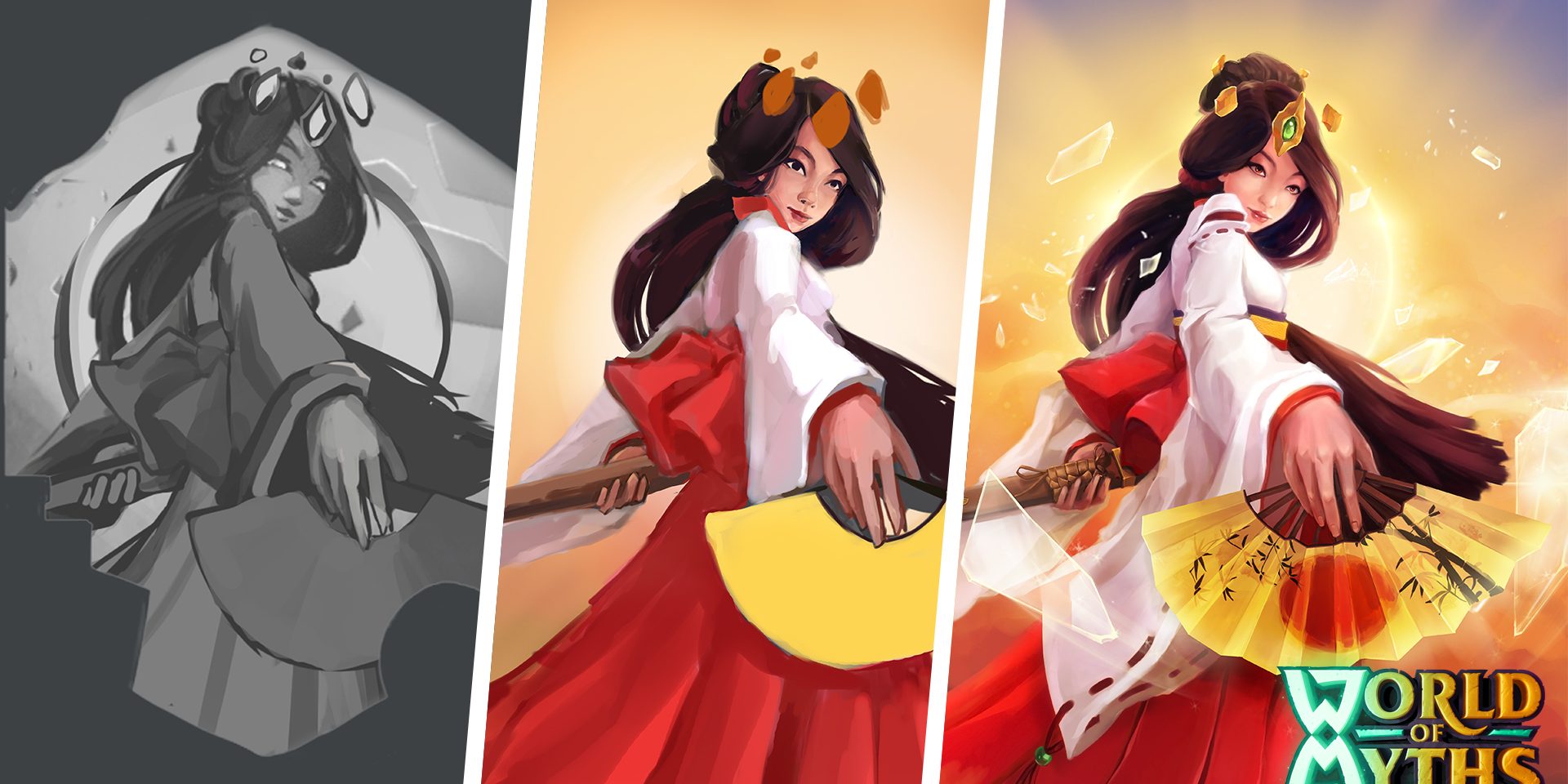 We continue our art showcase series with the first leader of the Japanese mythology – the beautiful Amaterasu.

Our challenge here was quite different from the previous one. We had to work on a character that is well known in the eastern contries but not so familiar in the western ones. The information for Amaterasu was limited so we had to work with little data, extract the highlights and add it to the art. On the bright side, when browsing the internet you could find many manga styled arts of the goddess but any other art style was almost non existent which was good for us because with Odin and Zeus the case was quite the opposite.

Amaterasu is the celestial sun goddess of the Japanese mythology, from whom the Japanese imperial family claims descent. Amaterasu’s name has an awesome translation that sumarize her image – “the great august kami(deity) who shines in the heaven”. Her story is related to the Imperial Regalia of Japan or the Three Sacred Treasures of Japan. Combined they represent the three primary virtues: Yata no Kagami: the mirror (wisdom), Kusanagi no Tsurugi: the sword (valor) and Yasakani no Magatama: the jewel (benevolence). Amaterasu bequeathed the items to her descendant Ninigi and it is believed that they still exist hidden in some museum.

Our main task with the art was to find a way to illustrate all those symbols – the sword, the mirror, the jewel and preserve Amaterasu’s tender, heavenly image. At first we made a mistake by focusing too much on the sword and making it a central piece of the art. The concepts lost the gentle feeling we were aiming and made Amaterasu look more like a warrior. We experimented with adding effects to her crown that look like sun beams and sun explosions but again this was too agressive approach.The mirror was another part that drained our brainstorming time. We didn’t want to picture the goddess like some beauty queen looking at a mirror with duck face. We decided to make it shattered to pieces that levitates around her. Later when we design a temple or statue for Amaterasu we want to animate the broken pieces’ levitation and glue them in from of her forming the actual mirror as a shield pointing at your enemy making him look at himself and his soul before attacking (Some deep sh*t going on there). 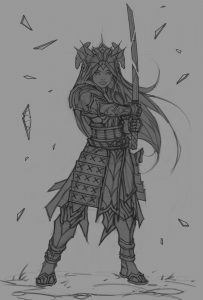 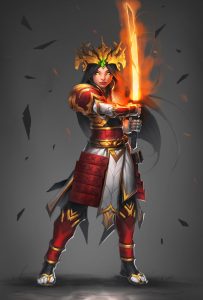 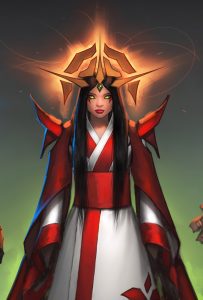 As one of the main deities Amaterasu was target for our initial experiments with the overall art style of the game. As you will probably note this style is quite different from the final version presented below. We learned from the mistakes in the composition of the those initial experiments and tried to improve with the next concepts: 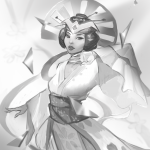 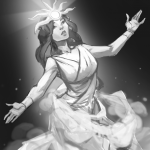 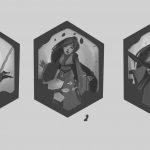 We loved one of those experiments. However it didn’t feel like a major art as it should be and we decided to place it in our backlog for further skin arts of Amaterasu. 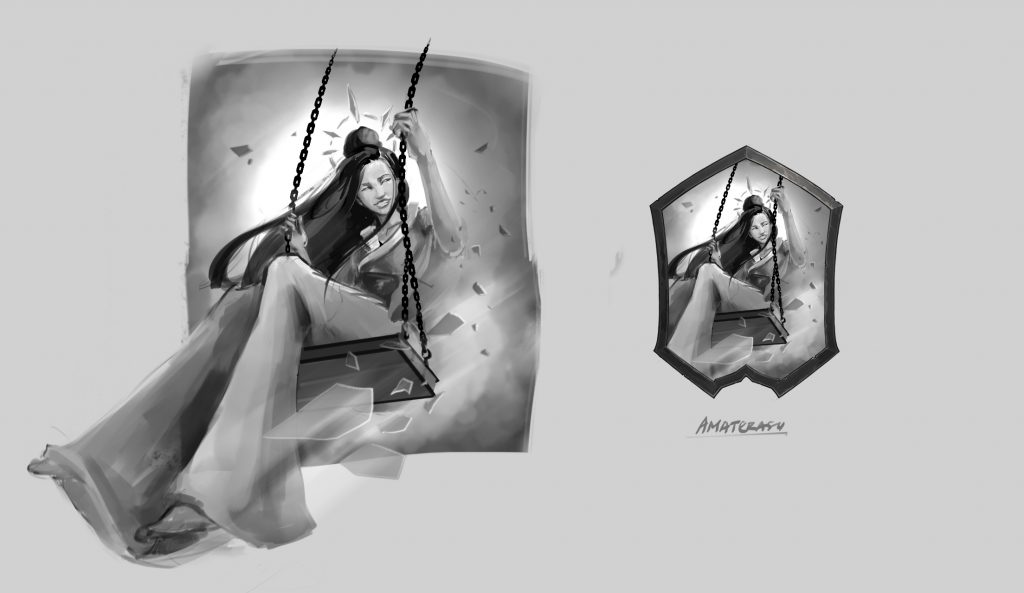 At the end we managed to fit all the symbols without making them too compulsive. I believe we achieved the peacefuly, heavenly feeling as well. 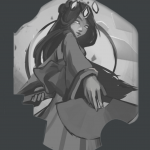 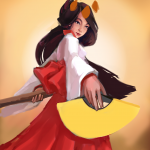 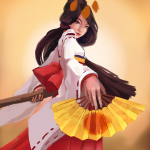 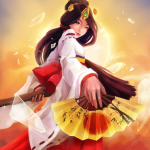 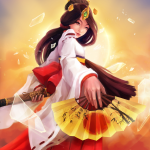 Can you spot the Imperial Regalia of Japan in the final version of Amaterasu? 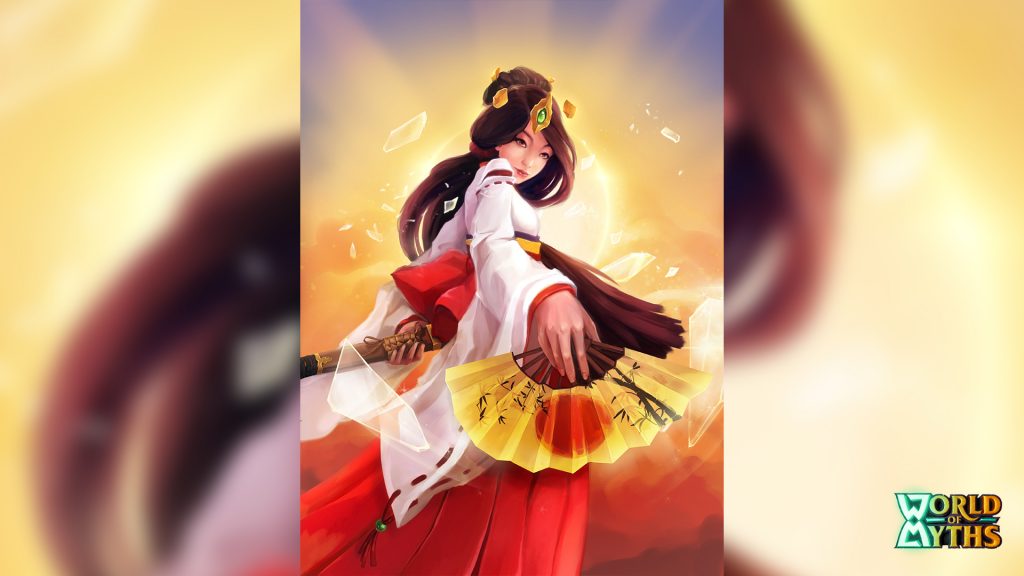 Amaterasu in World of Myths

Amaterasu will be among the first leaders that will be availabe with the release of World of Myths along with Odin. Our task designing Amaterasu’s effect was to present in a simple and concrete way the Japanese mythology and its playstyle. When you hear Japanese mythology the first thing popping out in your mind is probably some samurai fighting honorably with multiple opponents or another one performing seppuku after dishonorable event. This became a central part of one of the playstyles available to the Japanese mythology – making attacks with single powerful attacker and getting rewards for such bravery. To support that Amaterasu’s ability reads: “When you win attack with single attacker, deal 1 damage to the strongest opponent temple.” which we relate to part of the myth where Amaterasu hides inside a cave and thus hiding the sun and without sun the life is drained.

And this wraps it up for this week. We would love to hear your thoughts on this art – what parts would you change to improve the feeling and the image of Amaterasu? Don’t forget to subscribe and be among the first who will try the Japanese mythology.