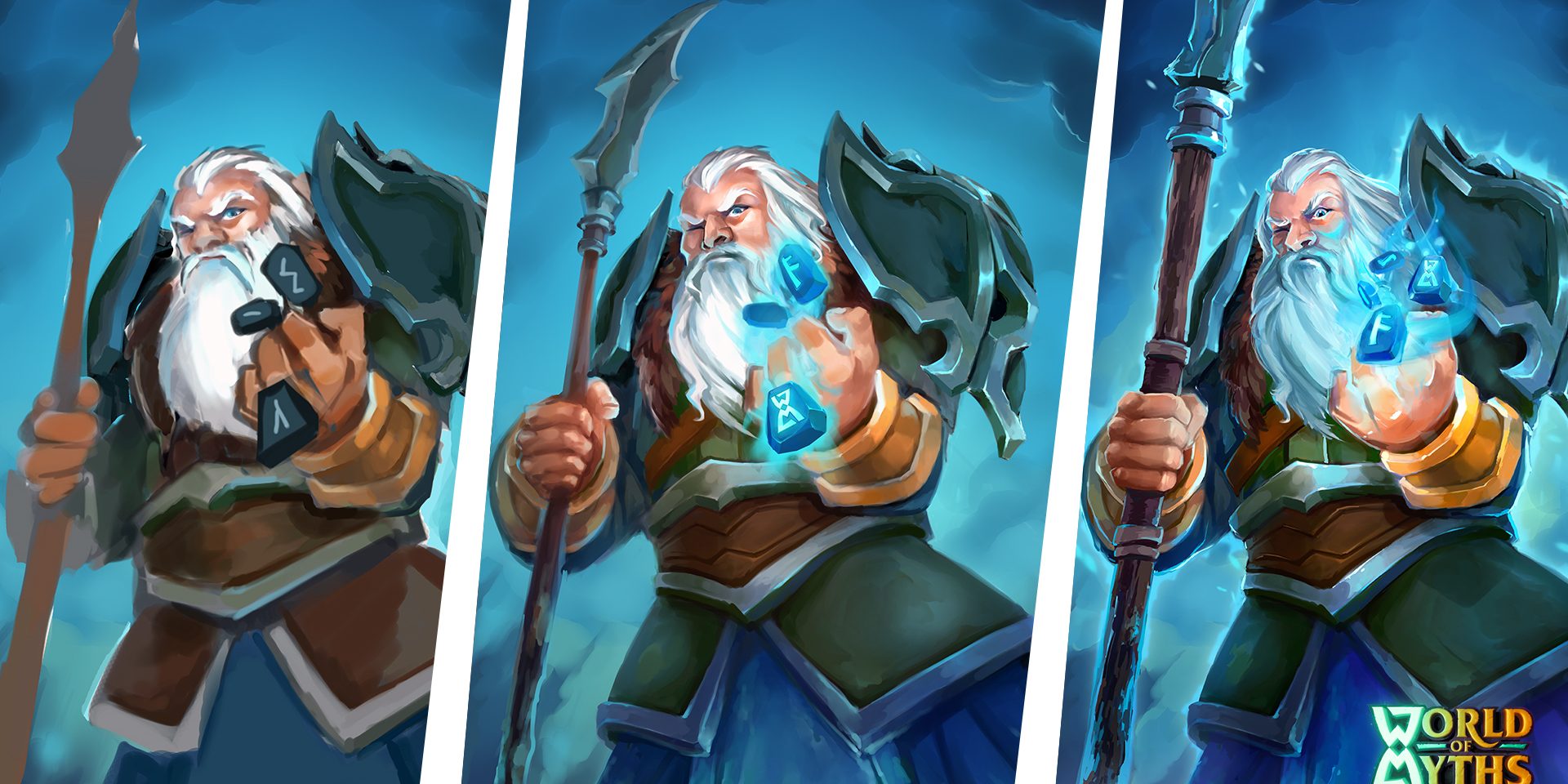 One of the key elements of any Collectible Card Game (CCG), along with its game mechanics, is the art of the cards. We are starting these series for those of you interested in the development of the art of our cards – from the initial idea and goals to the complete version. We will also explain briefly the ingame effect of the chosen card.

Many of the mythology characters are well known. There are countless illustrations of the major gods, heroes and monsters. So one of our biggest challenges with any illustration we make is how to keep it recognizable for the broad audience but add something unique that will distinguish it from all other artworks. The more popular the character, the harder the challenge. This is the main question we try to answer before we start to work on any art.

Odin is one of the major gods in the Germanic and Norse mythologies. According to the earliest sources Odin was a war god, but also the god on knowledge and runes (he even sacrificed his eye to gain access to the runes and the vast wisdom they give). He was also master of two great wolves – Geri and Freki and the ravens Huginn and Muninn. Because of the two ravens who fly all over Midgard (the name of the Earth in Norse mythology) and bring information to Odin, he was often referred as the raven god. His spear Gungnir was always with him as well.

There are a few key elements that must be presented in any Odin illustration – he is one eyed, he got a badass spear and even more badass companions. We didn’t want to focus on his sacrificed eye as it was major part in many artworks. But we wanted to show his wisdom in a way. So the focus on his spear also dropped out because making Odin a nice shiny glowing spear would have made him too intimidating. We decided to focus on the other options – his companions. We chose to try out some ideas with the two ravens as they could be easily illustrated somewhere around his upper body which was quite important so the illustration could fit in the small card frame and still be recognizable.

We wanted to add some twist – as this is our goal with all of the art we do – we tried to present the two ravens as shoulderpads. We also had the plan for a later stage of the game when we will design a temple or statue for Odin and animate how those shoulderpads transform into real ravens and fly through the battlefield then come back to Odin.

The rest of the art was pretty straight forward. 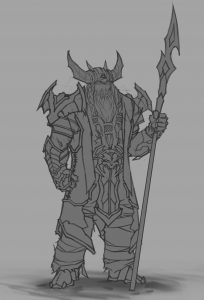 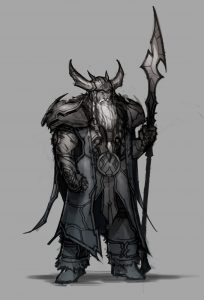 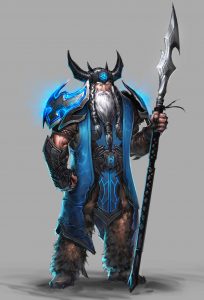 As one of the main deities Odin was target for our initial experiments with the overall art style of the game. As you will probably note this style is quite different from the final version presented below. However we kept the idea for the shoulderpads and the simple spear. 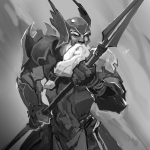 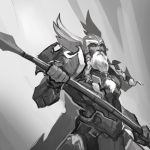 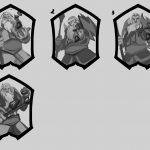 We then experimented with different postures that can best visualize our goals. When we got close to what we wanted – we started with the details. 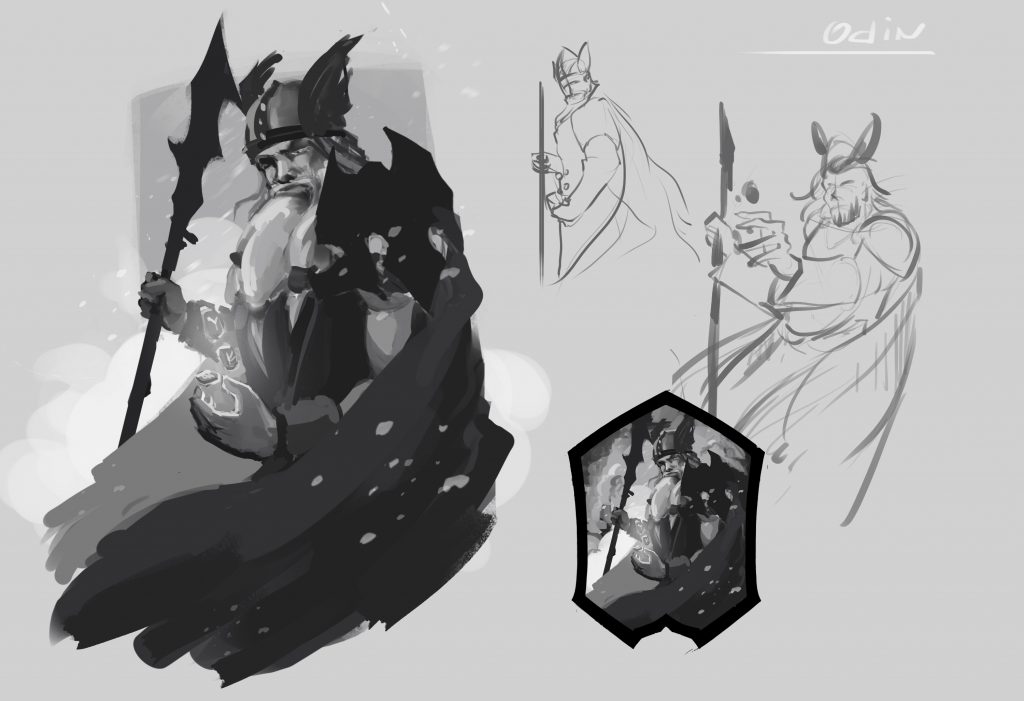 I have to admit that the biggest challenge with Odin’s art were actually the shoulderpads. Our artist spent hours trying to make that round non-trivial shape as best as possible. 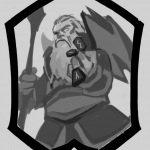 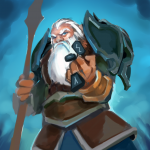 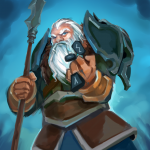 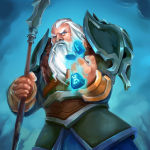 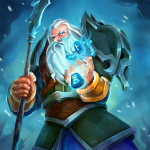 The other thing we aim to do is add the World of Myths symbol in all of our main arts. Our symbol is quite important and central piece of the whole game so there will be a separate article discussing it. Can you spot it in the final version of Odin? 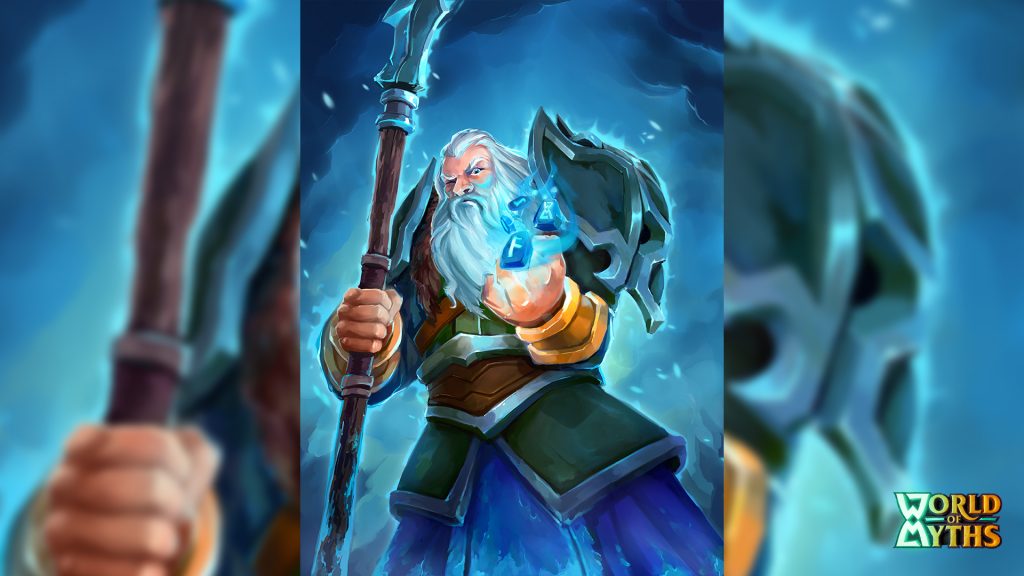 Have in mind that we try to avoid spending too much time creating the details of the art as usually that art will be available only in play and most of the details will be invisible.

However you have probably seen more detailed version of Odin on the home page of our website: 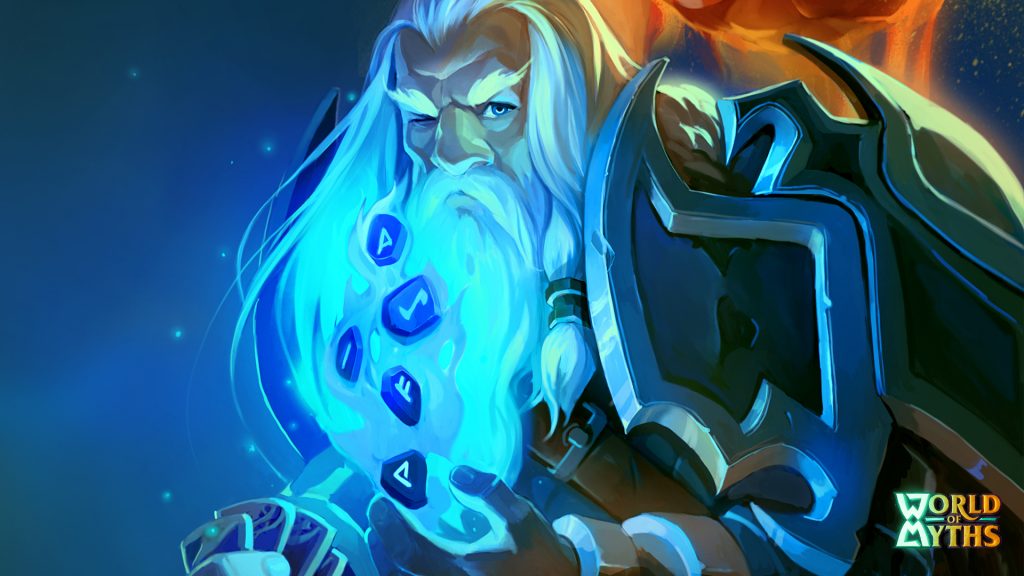 Odin in World of Myths

Odin will be among the first leaders that will be availabe with the release of World of Myths. So our task designing Odin’s effect was to present in a simple and concrete way the Norse mythology and its playstyle. Our design goal with the playstyle for any mythology is to make it as relatable to the real-world base knowledge for that mythology as much as possible. So when you hear Norse mythology the first thing popping out in your mind are rampaging vikings raiding some shore. Most of them lived in tribes of different sizes and grouped when they wanted to attack a larger target. This is why one of the playstyles that the Norse mythology in World of Myths can offer is focused on devastating attacks with multiple attackers. To support that Odin’s ability reads: “When you win attack with 2 or more attackers, all your units gain +1 power.”

And this wraps it up for this week. What do you think about our version of Odin – does it fit the image you have for that widely revered god? Also don’t forget to subscribe and be among the first who will try the Norse mythology in action.