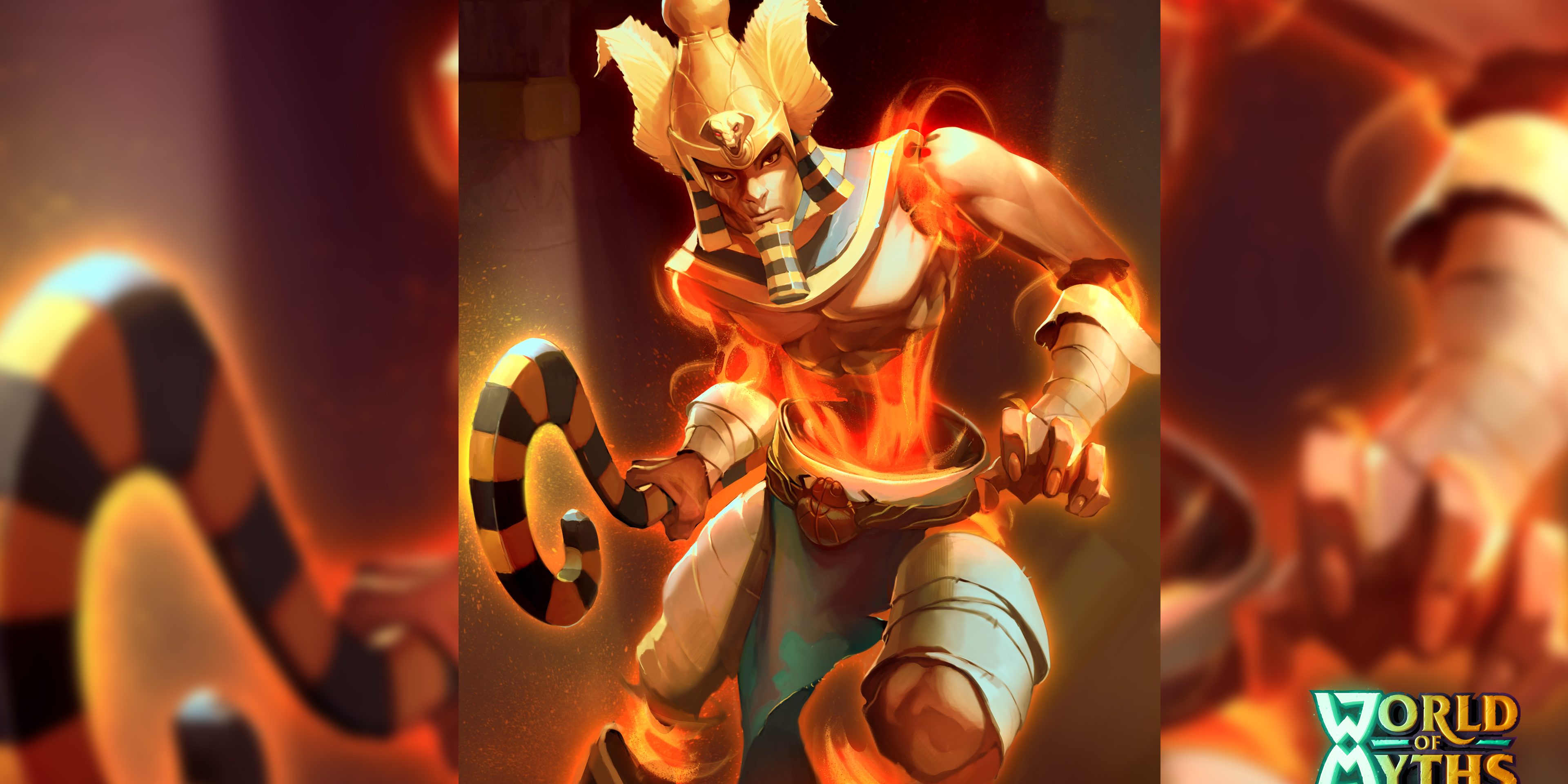 Tiye woke up confused and attempted to sit in her bed in the dark room, only to find that it was not a bed she was lying in. As she climbed from the opened sarcophagus, memories of what had transpired in the past few days started returning to her – wine, festivities … sudden chest pain … the sound of screams … suffocating. Realization dawned, but the room did not get any brighter – she was dead and this was either the afterlife or her burial chamber.

As she was waiting for her sight to adjust, the wall 10 feet in front of her, filled with hieroglyph images of people in the underworld being judged by the gods was illuminated by a surge of light. Tiye turned around in search of the light’s source and saw a circular gateway, glowing with such intensity that it hurt the eyes. On either side of it were breathing heavily giant lions, each unphased by the light, and each with their predatory stare intensely focused on her.

Shortly, multiple figures emerged between the lion keepers and it took Tiye a few seconds to realize that it was a procession. Two columns of people with the regalia of priests slowly filled the edges of the room, forming a circle that surrounded her. Following this, two more people stepped out of the light – an imposing man, towering over everyone else and bearing the symbols of a high priest and a hunched-over mummy, its whole body wrapped in bandages, not showing an inch of skin. Then, the high priest spread his arms wide and his voice boomed across the chamber: 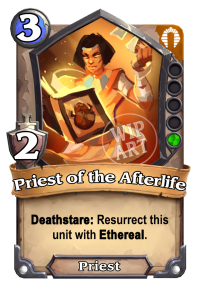 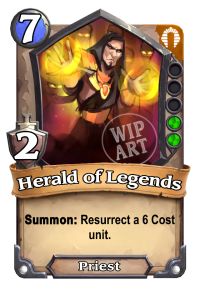 “I welcome you, Tiye, Queen-Consort of Ramesses III, son of Ra, ruler of the Nile to the entrance of the Field of Reeds, Aaru.”

Tiye took another look at her surroundings. This wasn’t so bad after all – the welcome committee seemed impressive enough for a woman of her lineage and status. She allowed herself to smile and the man who had spoken returned a smile of his own, which, for some reason made the recently deceased feel a shiver run down her spine. She opened her mouth, but before she could speak a single word, the procession leader’s continued speech drowned out all other sounds:

“As a woman of the highest status, it cannot be expected of you to follow the path of your lessers.” The speaker waved his hand and focused Tiye’s attention to the shimmering light. Despite hurting her eyes, she could not avert her gaze from it, as the mere sight of it brought warm memories to her heart, banished all of her fears and made hope nest itself in every corner of her soul. “Beyond this is Mandjet, the boat of the great Amun-Ra, who will welcome you in his warm embrace, to share in his Light, to add yours to His and make the flames of eternity shine even brighter.”

“That is of course after a judgment is passed upon your soul. As a woman of royalty and a close servant of the Pharaoh, you need not fear the wrath of Ammit. But you must still pass the tests. By now, I believe you have recognized who those majestic creatures are?” The rhetorical question was accompanied by a nod to the lions and a disturbing smile.

Tiye’s uneasiness was increasing and she just nodded, not daring to speak in case her voice betrayed her. Those were Duaj and Sefer, the lions of yesterday and tomorrow, protectors of Ra in his travels across the sea of stars. 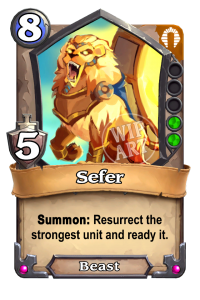 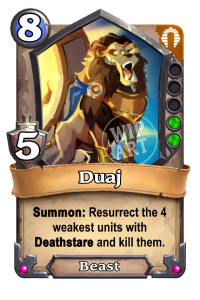 “Good. They will assist us. In his struggle against Apophis, Ra needs only the pious, wise and strong, for when facing the Great Serpent, only they will be able to resist the temptations of Chaos. You’ve had your entire life to sharpen your soul and prove your spirit. Duaj, he who looks behind will testify for your past.”

The bandaged mummy that had emerged earlier stepped next to one of the lions and put a hand on its mane. Duaj growled with the sound of a thousand sandstorms. The mummy whispered with a raspy voice and from the gateway appeared 2 priests, bearing a mummified corpse, which they put on the ground between the lions. The bandaged creature placed a hand on the corpse, and whispered in a raspy voice once more. The corpse began to move and slowly started to remove its own bandages. Beneath them was not a dry skeleton, but a man of royal appearance. No, not a man – a Pharaoh! When he spoke, it was with a voice so deep and commanding that it made the judged feel like a scarab next to a crocodile. 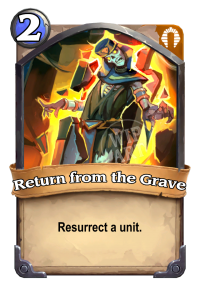 “I am Khufu of the 4th Dynasty! I built the Great Pyramid to honor the gods and built monuments in their name, so the people would never lose sight of our divine purpose! I greet you in the Field of Reeds, Aaru, made beautiful by our faith.”

Duaj growled again, the mummy that had resurrected Khufu whispered once more and the Pharaoh disappeared into the gateway. Shortly after, another man was brought forward. No, not a man – it was a child! He can’t have been more than 10 years old, but was still adorned with royal regalia.

“I am Tutankhamun of the 18th dynasty. My father sought to destroy and remake the beliefs of our people. I saw through his folly and dedicated my reign to restoring the temples of the gods and returning them to their past glory, as without the gods we are without guidance and roam the world aimlessly, like sand in the wind. I greet you in the Field of Reeds, Aaru, made bright by our wisdom.”

Another growl, another whisper and the boy disappeared, replaced by a titan of a man, who to Tiye seemed, could defeat whole armies by himself. The voice in which he spoke was a perfect match for the person.

“I am Ramesses II of the 19th dynasty! I conquered in the name of the gods and with my strength spread their will and wisdom across the world, so that all might serve their purpose! I greet you in the Field of Reeds, Aaru, made strong by our will.” 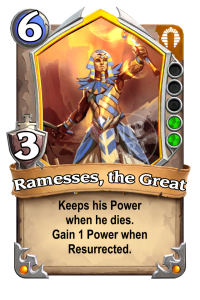 Saying this Ramesses looked at Tiye with such contempt, that she instinctively lowered her gaze. She immediately tried to conceal it, but the Pharaoh’s scornful look had sent an intense pang of fear through the very core of her being.

Behind Ramesses, the bandaged mummy whispered again and to Tiye’s great relief, the conqueror disappeared. The bandaged one stroked the mane of Duaj one more time and nodded towards the high priest. He nodded back and turned towards Tiye.

“Now that you have seen an example of each virtue, I ask you – what in life can testify for your piety, wisdom, and strength?”

Tiye’s eyes widened as the realization suddenly dawned on her – this wasn’t a welcoming party, but a court, with a judge and jury. She started racing through her memories, desperately trying to find some great achievement, some virtuous deed … but the truth was, her life was filled with nothing of note. In fact, it was …

A voice came from somewhere. Tiye shook at the accusation, which like a masterfully shot arrow, was both accurate and hurtful.

The same voice, the same result. She was frantically looking around, trying to figure out who was speaking.

… And finally, the judged saw the judge.

Where the bandaged, hunched mummy stood before, now rose a towering figure. As the bandages fell to the ground, revealed underneath was not a decaying corpse, but a man, whose presence outshined even Ramesses. Though Tiye was never very interested in religion in life, it was impossible for her not to recognize the God standing in front of her. 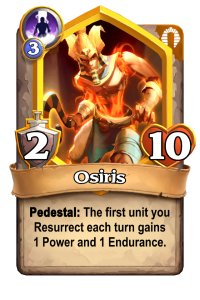 “Silence!” The deity’s voice boomed. Tiye felt her vocal cords immediately tighten and it was all she could do to not clutch her neck. “You are not allowed to beg. You are allowed to grovel, although I am not sure how much good will it do. You have lived a privileged life and have never wanted for comfort. You were given the honor of serving the Pharaoh, he who is the greatest among the people. And instead of helping him walk the path that the Gods have chosen for him, you abused his trust and conspired against him for your own benefits!”

Tiye strained to speak once more. “I did it all for Egypt!” is what she wanted to say, but the words refused to leave her mouth. But they were not necessary – Osiris’ piercing gaze saw all and she now understood that he could see not only her thoughts, but her very being, her soul. Too late had she realized that the truth could not be hidden.

“Even now, you seek to deceive. Even detached from mortal temptations and at the gates of an eternal and perfect paradise, you still lust for more. You are unworthy of the very soil you stood upon.”

Osiris turned his gaze away in disgust. Though dead, Tiye had felt as if she could not breathe for the entire time he was talking, but now finally felt something akin to air filling her lungs. But then, Osiris spoke again.

“Now, just as Duaj showed you what was, Sefer, he who looks forward, will show you what will be. The judgment you so cleverly thought to have escaped in life, I will now render upon your immortal soul.”

Tiye froze. But it was too late. Osiris, the supreme judge of the dead, put his hand on the mane of the second lion and the beast’s intense gaze fell upon her. And then Tiye, Queen-Consort of the 20th dynasty started screaming …

This story piece was created by Demigod Malkavian.

*Resurrect: Move the bottom unit from your graveyard to your left flank and set its Endurance to 1.