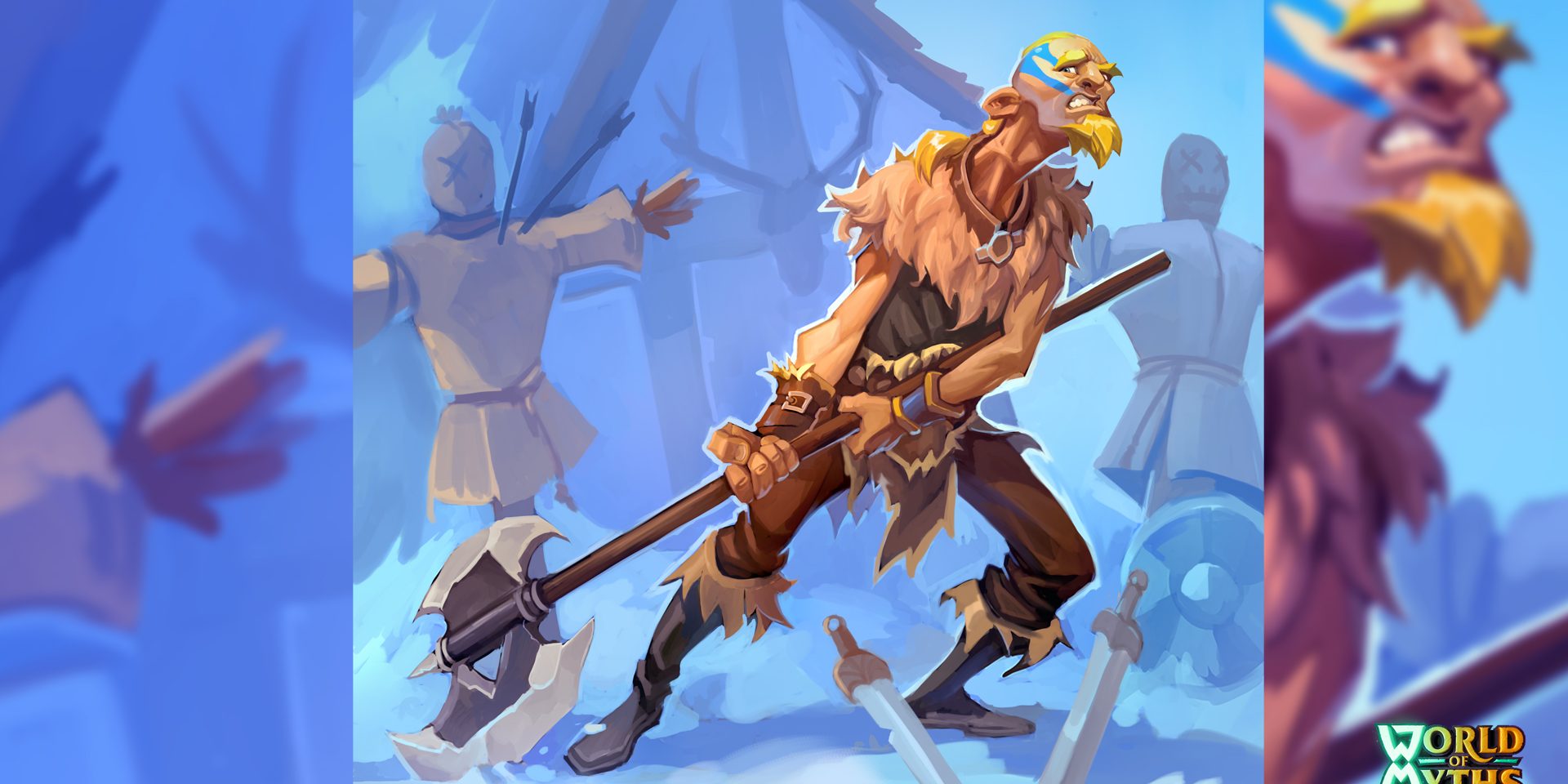 If you are new to World of Myths, enjoy the game and want to get better at it – here are 10 tips to help you better understand the game and its’ mechanics!

Once you have declared your Units of choice for battle, you cannot change or undo your selections. You also cannot change the first Temple you clicked on for an attack. Please calculate and evaluate carefully before you act! Although a lot of the cards’ mechanics revolve around this game mechanic, this is one of the most common concerns we often hear from new players and they often suggest new alternative ideas or ways to modify that which currently exists. This is very much in fact, a game mechanic intended to remain until a better idea is presented, in a constructive manner, that does not compromise the skill curve/ceiling of the game. It’s most likely going to stay though because unlike its CCG contemporaries, World of Myths is for the strong and mighty BULGING, THROBBING, and VEINY big brains and not for the weak-willed little man who’s constantly victimized by natural selection and has a sweaty breakdown during big decision-making scenarios.

Bonus: You can double click on a unit to declare it for battle! 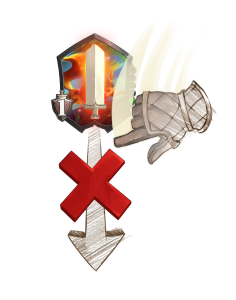 Do not be afraid to let your Temples take damage! Not all attacks have to be defended against. Sometimes it’s better to simply let an attack, especially large ones, go through as it may result in one of your temples completely destroyed thus depriving your opponent the ability to farm that temple’s spoils and gaining a big card advantage while also accumulating stat buffs for their units. On the other hand if you’re running a fatigue build, consider defending just enough so that tiny tickle damage seeps through; they’ll start drawing more cards than they realize is necessary and you’re just gonna stand there and watch em’ burn (cards) but that’s alright, because you like the way it hurts (them).

Bonus: You can buff your opponent’s attackers so they destroy your Temple faster. This is a good consideration if you have a hard time building a board and your opponent is constantly attacking your middle Temple. 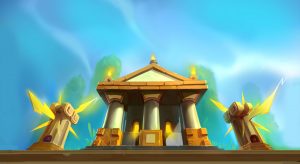 Your turn begins when your enemy finishes declaring their units for an attack. If you choose to defend with a unit and it survives the battle, that unit will become “exhausted” and will be ineligible to be selected/declared for battle when you go on the offense in the same turn.

Bonus: Your Units ready themselves (remove exhaustion) at the start of your opponent turn!

This is a rather niche mechanic that not many players, even some experienced ones, know about: you’re able to defend with your Leader if you summoned them on your turn without having them participate in an attack. BUT BEWARE! If you summoned your Leader for the purpose of defending, your Leader is unable to defend themselves if they are the target of your opponent’s attack. In other words, your Leader can only defend against temple attacks.
Bonus: There are not many card effects that affect your Leader, so attacking with them is sometimes a good decision if you really depend on the attack success.

Be mindful of where you summon your units as positioning is usually very vital in World of Myths and can mean the difference between winning, clutching, or inadvertently throwing a game. Temple spoils are one thing to consider as they are granted to the most left and most right Unit. There are also spells and units that rely on the positioning. For example – “Buffs all friendly units that have an enemy unit directly in front of them”. There’s also a unit whose ability renders an enemy unit useless for battle if they’re positioned directly in front of them. Then there’s a certain Leader who will grant additional power to the Unit on the farthest left (flank) but also weaken the unit to the right of the left flank unit. There are many more instances of why positioning is important but my fingers are getting stage 3 arthritis, I have carpool tunneling or whatever that STD is called, and I’m only halfway done with this blog post.
Bonus: Temple spoils are granted after units lose Endurance for participating in a battle. This means the unit that battled might not necessarily receive the buff because they got hella dead; in which case, the unit adjacent will receive the stat buff instead. 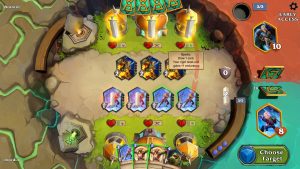 Like other CCGs, there’s punishment for running out of cards to draw from your deck. This universal CCG term is called “Fatiguing.” In World of Myths, when you run out of cards, your Leader “fatigues” and will suffer 2 points of damage each time you attempt to draw a card. This is not limited to the mandatory draw when your turn begins but also includes the card draw attempt/s when you successfully deal damage to your enemy’s left/right temple. If you were to go take a shower to think about it and reflect on life, you’ll realize fatigue is a rather profound analogy for a certain gentlemanly pastime. It’s like when you run out of dollar bills, the “exotic dancers” will get angry and each swing of their 6-inch spiked heels will take off 2 years of your lifespan. Worth the though.
Bonus: If you find yourself running out of cards, try to skip one or two attacks so you can build a stronger board and destroy a Temple in one hit. Otherwise, you will continue to draw cards from small attacks.

As mentioned earlier, Your Turn starts on defense assuming your opponent declared an attack. During this time, your faith will not yet increase & refill and you are left with however much faith you didn’t use during your last turn when you ended it. You may use the remaining amount of faith to cast spells against your enemy and take them by surprise, leaving them to be more wary and cautious the next time they decide to summon and attack with their new units. Like spells, there are special units that can be summoned on defense if they contain the “Reinforcement” ability keyword and they’re automatically able to defend. This defensive mechanic will leave your opponents paranoid with constant second-guessing and uncertainty, which is great because all battles are first won in the mind! But that doesn’t mean you should delude yourself into believing your crush secretly reciprocates your feelings. Somebody had to tell ya.

Bonus: If your opponent left a considerable amount of Faith in reserve and did not attack you, you might reconsider your moves as they most likely have some hidden tricks. 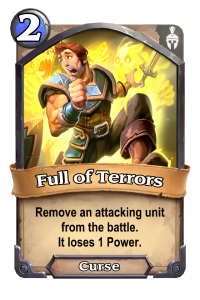 During the mulligan, the background is blurry but you can tell which player goes first by which side of the field the gold coin is on; positioned either at the top left or bottom left corner. If you go second, you’re given a “Fresh Recruit” which is a 1 power 1 endurance Unit so that the enemy going first does not have an advantage against you.

But most importantly, he can’t really attacc

Bonus: If you go first, attacking the Middle Temple and getting rid of the Fresh Recruit might seem like a great move but most often the card advantage from the side Temples will give a long-term benefit. 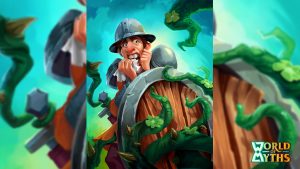 WoM’s mulligan takes it a step further. Not only will you not redraw the same copy that you discarded, but you won’t draw the same card at all assuming you have more than one copy in the deck.

Bonus: If you want your deck to be more consistent try adding 2 copies of all cards when possible. This way with the mulligan mechanic, you get a higher chance to have what you need in hand on turn 1.

Rather than there being one singular rank representing your whole profile, each Mythology has its own rank! This means you can be Bronze 2 for one Mythology and Diamond 4 for another faction at the same time. You are also rewarded for each faction placement at the end of the season. You’ll gain full rewards for your highest ranked Mythology, and reduced rewards for the rest.

Bonus: Each Rank has 5 levels with 5 being the lowest and 1 being the highest. The Ranks in order are: Wood, Stone, Bronze, Silver, Gold, Platinium, Diamond, Master and above them all the unreleased Grand Master 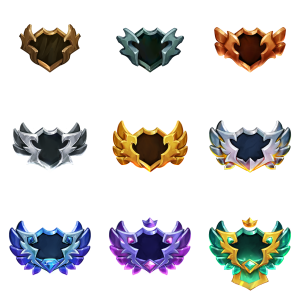 We have a Discord community full of helpful players eager to: answer any inquiries new players may have and generally assist them in understanding the game better. By joining the Discord, you’ll also enjoy the benefit of perusing/accessing deck builds made by experienced players and receiving helpful information regarding tournaments for REAL RENT & ELECTRICAL BILL money and other rewarding events, including the occasional chance to win extra card packs. Being a Discord member also means having a voice in shaping the future of the game with card-balancing discussions, the occasional poll votes, and being able to speak to the developers directly. Hurry up and join already. We promise we’re not a suspicious cult of any kind!

This blog post was created by one of our community members – DamienAtticus/ign:YugiohIsBetter. If you join our Discord to ask a question and receive an answer in the form of screenshot – it’s definitely him answering you.
Share this post
Share with FacebookShare with Twitter

Tezcatlipoca – A Look in the Smoking Mirror
2nd September 2019