Quetzalcoatl – The Feathered Lord of the Morning Star 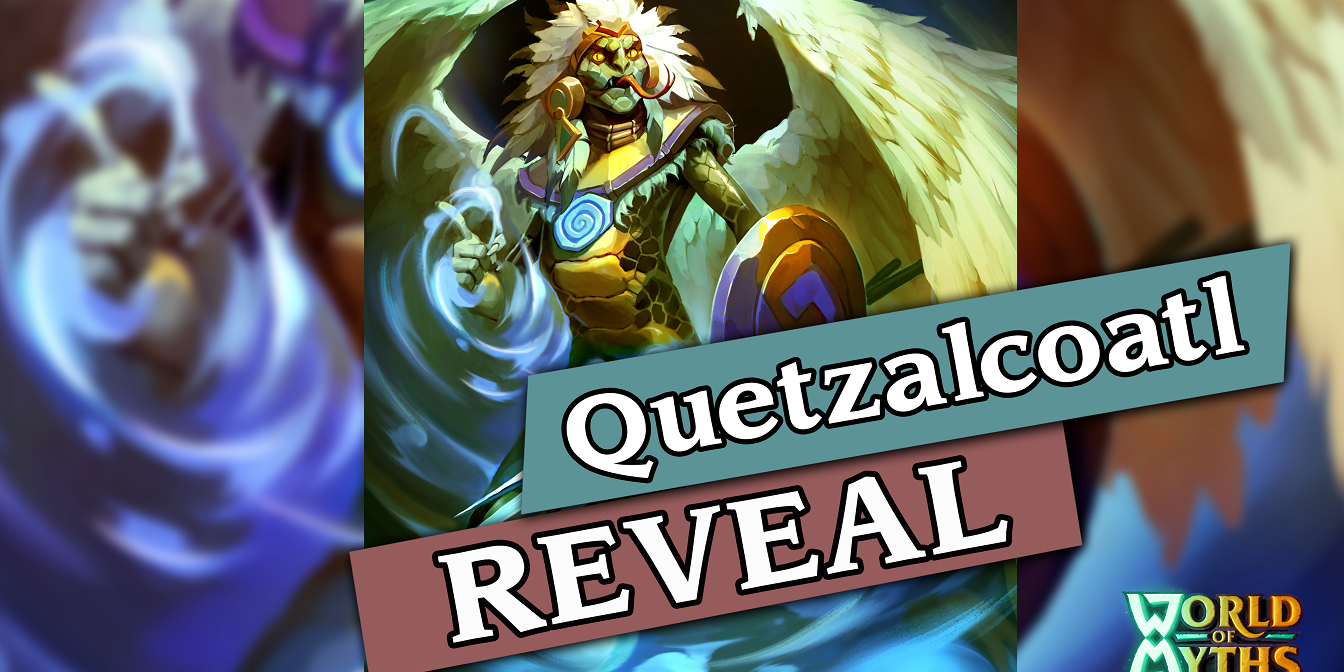 Another glorious day – the sun gently peaks from the horizon and thousands of devoted worshipers are there, standing on the great pyramid of Cholula, to greet the crimson dawn and pay their respects. The Feathered Serpent was kind on them once again and they are blessed with another day of sun and prosperity. Hopefully, the new day will be as bountiful as the one before, or else everyone will feel the wrath of the God of Wind.

All Hail the New Dawn

The first leader in our new MesoAmerican Mythology is none other than Quetzalcoatl – the Aztec God of Creation, Winds, and Knowledge. This Feathered Serpent is ready to wreck the enemy lines, single-handedly if he must. Wearing his wind breastplate and his spiral wind jewel, Quetzalcoatl has the stones to match any army on the battlefield. His gaze is fearful and his might is unprecedented. When his anger comes crashing down upon you, you will soon realize you’ve set foot into the wrong jungle. 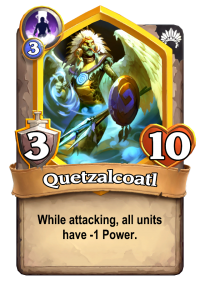 We’ve seen Leaders being used as a main attacking force numerous times now in the different Mythologies. However, this one is kind of special in that regard because of his dedication in that direction. Quetzalcoatl is your perfect match if you would like seeing your Leader on the field and actively in combat. His effect makes him a threat to any opponent, since their units’ power can quickly diminish in the Feathered Serpent’s presence, leaving their temples wide open. Quetzalcoatl is also the first Leader in World of Myths whose ability work only while he is on the battlefield.

Worshiped By Many, Feared By All

The mere presence of a deity of such might is enough to set fear into the hearts not only of the foreign worshipers but yours as well. That could be a powerful ability to pass through the enemy defenses, but it makes defending your own temples an inconvenient task. Yes, loading your deck with high-power units seem like the easy solution, but marching them on the field could be rather challenging. That’s why we’re introducing units, who would be of great use to all you Quetzalcoatl fans out there. One such unit is the mighty Bacab of the South. This powerful giant is one of the Bacabs holding the sky and he derives his strength from the weakness of others. With Bacab of the South, at your side, you have a powerful defender of the weaklings, who tremble before the Feathered Serpent’s might. 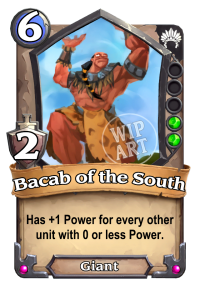 Not only powerful giants, but the beasts of the jungle are also at your disposal when you pick the MesoAmerican Mythology. One such beast is the Palenque Xook. This ravenous fish monster is waiting silently for any unfriendly creature, who dares to set foot in its lake, ready to bite it off. This peculiar unit will help you to protect not only your Temples but your summoned Leader as well. 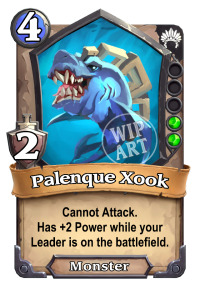 Quetzalcoatl is s powerful Leader who is ready to help your cause in the simplest way possible – by crushing your enemies beneath his own palms. With the right support by your units, your opponent’s Temples will rubble and scatter the dust in the wind as if no one ever was there.

Quetzalcoatl is the first of four leaders coming out with the MesoAmerican Mythology. Deep in the jungle, where no sounds come from, there may be something much more sinister than you may think. Next time we’re delving into the shadows and get to know a very unusual Jaguar God. Hopefully you have what it takes to be his ally, otherwise, you may become his captive. Or even worse – his dinner… Meanwhile, don’t forget to Pre-Order your copy of the MesoAmerican offers that we have in-game!