New Leaders Designed By Our Champions Are Here! 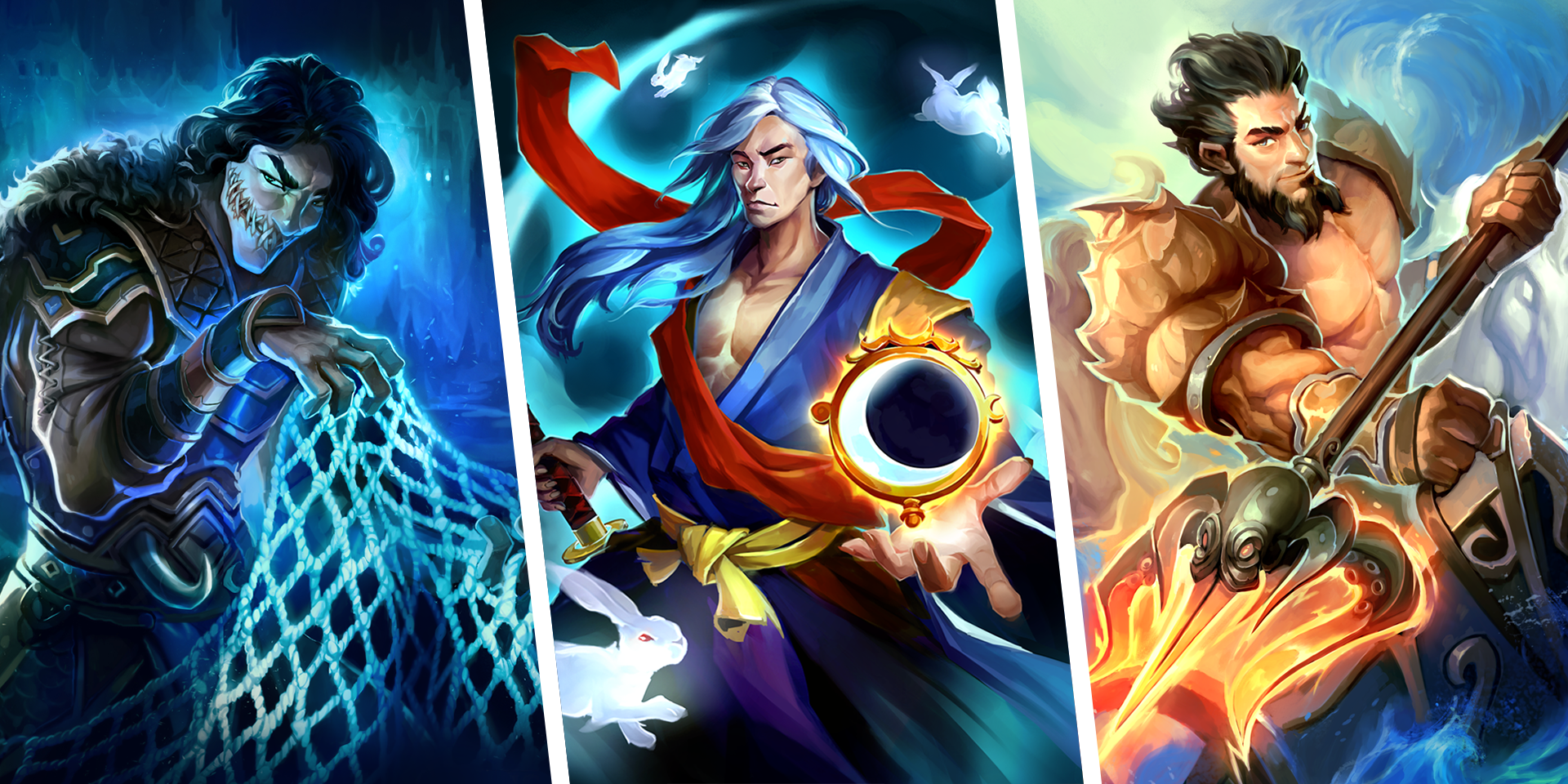 We were really excited to work with our tournament champions to design the next wave of leaders hitting World of Myths and here are the results.

The Ocean Roars and the Ground Shakes

Sailing the open seas should not be taken lightly. One should always be wary of the dangers in open waters – the tricky weather, the treacherous currents, or maybe the creatures lurking beneath the surface. The good preparation is key, and of course, nothing is more crucial than a sacrifice to the God of the Sea. Poseidon – worshiped by many and feared by many more. The Greek god of the seas, storms, and earthquakes is the first new addition to the World of Myths’ Greek Mythology With his great power and bad temper, Poseidon was a dangerous adversary to all who tested his mood. And your opponents are about to find that out soon enough. 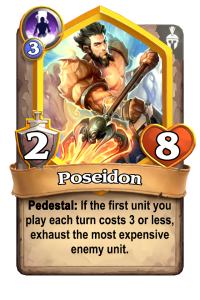 With Poseidon as your leader, even the strongest opponent’s units will tremble in fear. With his ability in your arsenal, you would be able to exhaust the most dangerous enemy creatures easily and take advantage. The undeniable champion of our Prelaunch Challenges – MegasAlexandros – was given the opportunity to design a leader for his Mythology and his choice fell on Poseidon. Megas was kind enough to share a few words about how he imagined the role of Poseidon in World of Myths.

“I chose Poseidon as the third Leader for the Greeks because he is one of the two brothers of Zeus, the king of the Greek Gods. Not only that, he is the God of Sea, soil, earthquakes, and horses! I would like his effect to be on par with the Greek’s signature mechanism which is the exhaust one, to be a ‘deck-building-around’ ability and to provide constant value through the course of a match. The card’s visuals should depict his domain while he is riding the furious waves, charging the unfortunate enemy on his chariot and showing what’s coming next with his powerful trident that causes earthquakes and tides and makes enemies unable to fight, hence the exhaust effect! I hope you like it!” MegasAlexandros.

Well, Megas, we do like it and he is already a favorite to some of our Closed Alpha players.

Of course, the leader’s ability will never be enough, if you don’t have the proper deck. There are plenty of fierce Greek creatures, looking to bend your opponent’s knees, such as the Thirsty Empusai, lurking in the shadows and bewitch young warriors for supper. The one thing the young men usually realize too late – they are not just guest, but also part of the meal. By playing Thirsty Empusa with Poseidon as your leader, you will be able to benefit from his ability and her effect as well, giving you the opportunity to exhaust two units with one move. And if the Priest of the Waves is present at your side of the field, he will benefit greatly from the stacking effects and receive a solid power boost. 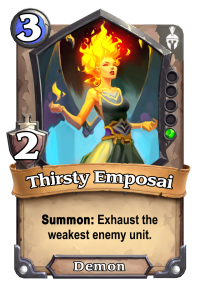 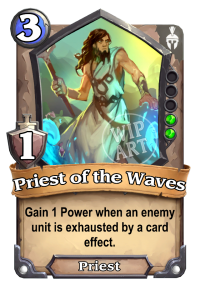 Playing with Poseidon will shake your opponent’s chair and force them to either adapt to your play style or sink helplessly beneath the roaring waves. We’re thankful for MegasAlexandros for his suggestion and look forward to seeing Poseidon in action upon our upcoming Steam Early Access.

We all have that one friend that is just way too unpredictable. One moment they’re reliable, honest and helpful, the next they’re being selfish and disappoint you. But they’re still your friend, aren’t they? Sometimes you want to hug them, sometimes you want to slap them, but you’re still friends… right…? That one erratic friend in the Norse mythology was Loki – the God of Mischief. He was constantly switching sides and either help or hurt the other Norse gods. That way he gained the reputation of an unpredictable and eccentric deity, who should be approached with caution. But if he is at your side of the field, your opponents are the ones that should be careful. 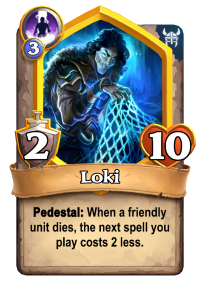 With Loki you will be able to benefit from your misfortune – you gain a solid decrease in the cost to play tricks in the form of spells when one of your units perishes. This is how we tried to capture Loki’s two-faced nature – you may gain his favor only if something negative happens to you. The one responsible for the inclusion of the Trickster God in our pantheon is JiNn. As a runner-up in our first tournament, he was awarded a Norse leader spot to fill and, expected or not, this is how Loki emerged from the shadows and found his place on the pedestal. With the God of Mischief behind your ranks and the proper deck, your opponents will find the knife in their back right after realizing they’ve already lost.

When your units perish that’s usually not a good sign, but with Loki as your leader you gain an advantage when you lose units. That’s the time for the Draugr to shine – waiting for his moment to come out on the field directly from your hand when one of your Vikings die. That way you can use Loki’s ability and still keep your unit count. When the time comes it’s up to you to unleash a terrifying curse upon your enemy, such as the Shade of Loki – a powerful spell, capable of crippling the opponent’s creatures and leaving your opposition’s temples open for a ruthless attack. 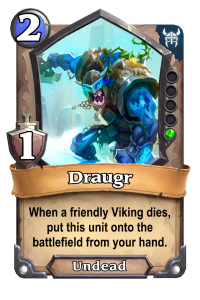 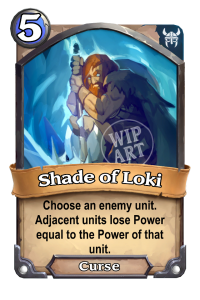 Letting creatures perish, deceiving your opponent that you’re losing and planning a cunning and devastating counter-attack – that’s the way of the Trickster. While you have Loki in your corner, you will be able to hit your enemy when they feel the most comfortable. And you would be the one who laughs last!

The Night Is Dark And Full Of Yokai

It’s unwise to step out at night when the yokai are watching your every step. Each subtle sound, each obscure movement in the dark, each faint gust of wind may be alarming. In the darkness of the night when you’re in need of guidance, the moon may be the only light to show you the way. For the night is the domain of Tsukuyomi – the Japanese god of the Moon. Tsukuyomi was banished from the Plain of High Heaven by his sister and ex-wife, the sun goddess Amaterasu. From that moment on, they resided in different parts of the sky – Amaterasu reigned in the day, while Tsukuyomi settled in the night sky. And no, Tsukuyomi will not help you defeat your opponents by boring them to death with the complexity of his relationship status. He will give the opportunity to slowly drain the life force of the enemy units and clear the field for your attacks. 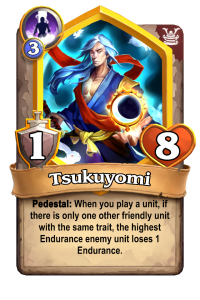 With careful and purposeful deck building you can make it very hard for your opponent to maintain stability on his side of the field. And when your enemy units are weak, that’s the time for the creatures of the night to strike. When playing with this leader you will benefit from playing similar creatures on the field, but not too many – the right balance between similarity and diversity will be crucial. As a winner of our first tournament, we worked with RoanFX on bringing the next leader in the Japanese mythology roster to be Tsukuyomi. With the proper deck and the right approach, the God of the Moon will help you force the enemy units to the ground and destroy the opponent’s temples beneath the shroud of night. RoanFX wanted to capture the counterpoints between Amaterasu and Tsukuyomi with one being the god of the Sun and the other the one of the Moon, brother, and sister. Having Amaterasu’s ability already in the game it was logical to try to reverse it and thus create Tsukuyomi’s special ability.

Surely, there are some creatures that work best with Tsukuyomi as your leader. One such unit is Yuki-Onna, the snow woman. This powerful yokai is infamous for enticing men, luring them in the snow and turning them to solid ice with a single kiss. To maximize her influence, you would want another spirit at your side of the field. That way when you play her you will drain two endurance points from your opponent’s army – one from her effect and one from Tsukuyomi’s. Playing spirits, ninjas, demons and other night dwellers in that way will bring plague and scourge in the enemy lines. That’s when the Priest of the Moon gains his strength and for each removed endurance point, he will get more and more powerful. 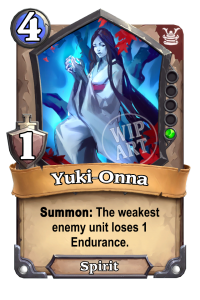 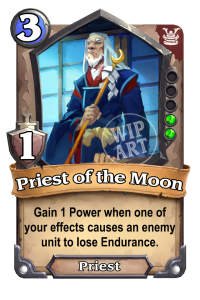 The creatures of the night are dangerous and merciless. The spirits are just waiting for a gullible soul to enter into the darkness and become their prey. Becoming one with the night and gaining the favor of the Moon will not only make you feel safe in the night but also let you take command of these relentless creatures. The effect of Tsukuyomi is powerful and in the hand of the right player, can bring victory and glory. Are you the right player to wield such power?

The Community Making Us Better

We’re very glad for your solid support. Our Discord community is growing and helping us shape the game that we can all enjoy together. We’re very excited and can’t wait to implement the ideas of our next tournament champions. The positive effects are already there – the winner of our spring Gods Awaken Tournament – Lak – won his final match with Tsukuyomi as a leader – namely the one leader, suggested by the previous tournament winner – RoanFX.

You don’t have to be a tournament champion to have your voice heard though. We are currently accepting ideas in Discord for the next Myhgology coming to the game – MesoAmerican (which you voted for a couple of months back).

You want to see those gods in play? We are preparing a series of Leaders Spotlights that we will start releasing this week, so stay tuned!