The land of philosophy, art, and science. The birthplace of medicine. The seminal culture that provided the foundation of the modern West. A place full of architectural wonders accompanied by a mythos seeped in countless, detailed stories that are still told to this day. Welcome to Ancient Greece.

Drawing inspiration from legendary works such as Homer’s “Illiad” and “Odyssey” and Hesiod’s “Works and Days” and “Theogony”, we are proud to introduce you to the Cradle of Civilization as it was portrayed by the beliefs its people held and the myths they told.

In Pursuit of Perfection

As evidenced by their many contributions to science, Ancient Greeks valued knowledge highly. Being at the forefront of a wide array of developing areas stretching from mathematics through medicine and all the way to warfare and tactics, the people of this period strongly believed both in the pursuit of the unknown and that the truths uncovered from mastering it would bring them closer to the Gods.

In World of Myths, this combination of curiosity and ingenuity is embodied in a preference for combat tricks, the Exhaust mechanic and additional synergies based on your or your enemy’s unit locations on the field. Whether units are in the middle of a formation (“Center“) or positioned to the sides (“Flank“), you will see various effects that can influence them.

Exhaust, the Greeks‘ signature mechanic allows you to disable your opponent’s troops, immediately putting some or all of them in an un-ready state as if they had just participated in a battle. Simply said – exhausted units cannot participate in the next battle. Why face the enemy’s full force on the battlefield when clever utilization of this tool can allow you to either easily slip through the opponent’s defenses or significantly weaken their attack potential? Whether through a simple trick, a brilliant maneuver or as a Curse from the very Gods themselves, the plethora of Exhaust effects allow you to carefully pick your battles.

But not all means to disarm your foes come from a desire to fight. Sometimes all it takes for a soldier to drop his weapon is a single glimpse into the divine. A single look at perfection. A glance at a sight surely not meant for mortal eyes to behold. Unquestionably ideal beauty. 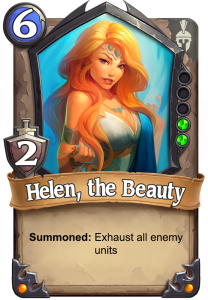 “Alas for my troubles! Can it be that her beauty has blunted their swords?” – the princess of Argos wails as Helen’s splendor disarms even her most belligerent foes.

Helen of Troy symbolizes the Ancient Greeks’ strides to perfect not only science and tactical warfare but also the ability to create and appreciate art and beauty. In World of Myths, her effect is simple but incredibly powerful. On the round that her divine beauty first comes into view, your opponent’s entire army will drop their weapons and marvel at the face that launched a thousand ships and burned the topless towers of Ilium.

As a Legendary card that can only be included once in your deck and as a card requiring a significant amount of the Faith resource, deciding when to take advantage of Helen’s sweeping effect will likely be one of your main considerations when playing with her. While potentially giving you respite from attacks, Helen can also be used as a tool for offense, allowing your troops to completely walk past the enemy’s defenses. Use her gift wisely.

“The strongest offense is a good defense!”

Or was it the other way around? Regardless, the people of Ancient Greece believed that it is often more advantageous to let the enemy come to you. Choosing the battlefield, positioning your troops beforehand and meeting the enemy on your terms often allowed the Greeks to stack the odds in their favor even when otherwise disadvantaged.

This preference for defense is symbolized in World of Myths through cards like Corinthian Phalanx who stands ready to mount a counter-attack right after defending and Acropolis Guard who has forfeited his ability to attack but has instead become a master of defense. 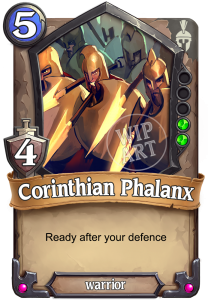 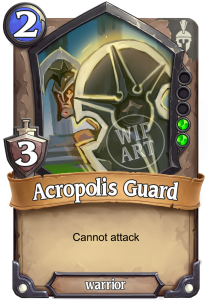 But do not mistake this penchant for defense for meekness as the Greeks are also capable of fearsome offense. While they staunchly protect their Temples, they also make ready for a vicious counter-attack. Fielding not only the famed warriors of Sparta but also mighty beasts of a legend like the Cyclops and the Creten Minotaur, the armies of Ancient Greece are a force to be reckoned with both on defense and on offense. 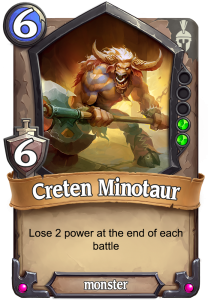 You’ve probably heard this adage at least once in your life. In ancient times, this belief bordered on fact. But today, we regard it as a simple misconception. And so, in World of Myths, when facing lightning, beware … for it may just strike you twice!

Introducing Zeus – The Lord of the Sky, The Cloud-Gatherer, The Rain-God and, most notably, The Thunderer. Known as the child of Cronus and Rhea, the father of many heroes of legend and as the deity sitting on the throne of Mount Olympus, it is of little surprise that the King of the Gods leads the Greek Pantheon in World of Myths. 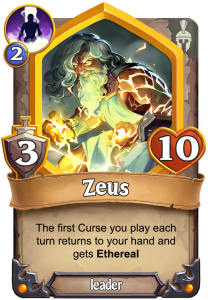 *Ethereal – When this card would enter your graveyard, instead remove it from the game

As the God of law, order, and justice, as well as the living personification of lightning, Zeus acts as judge, jury, and executioner when the order he has dictated is disturbed. As such, The Thunderer will not hesitate to throw more than one bolt of lightning when he deems necessary. But mastery of the skies is not the only weapon in his arsenal. When truly angered, the irritable King of Gods will bring to bear the full power of the Pantheon he leads and curse his enemies with a seemingly endless barrage of disasters in the form of the aptly named Curse cards.

Will the enemy’s strongest warrior has his strength sapped and be unable to participate in this turn’s battles after being hit by Whispers of Hypnos? Will another refuse to attack as he swears that he sees only death on the battlefield after his mind is Full of Terrors? Or will an entire army be stopped in their tracks as the heat hits the battlefield with Summer Heat? 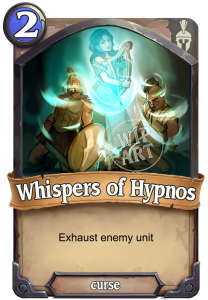 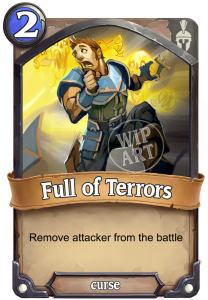 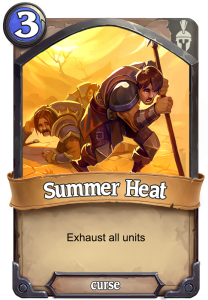 Only time will show the full extent of the power he who once wiped out mankind wields. But whether you swear fealty to Zeus or choose to face him on the battlefield, don’t forget – lightning strikes twice!

If you are one of those guys who like playing surprising spells and trick your opponent then the Greeks are definitely an option you should consider. However, if you leave your opponent untroubled you will have a bad time. Your attacks might not be as strong as the Norse or the Japanese but there would rarely be anyone to stop you if you play your tricks right. For all your deep strategy lovers – give the Greek mythology a chance. You won’t be disappointed but your opponent might be.

Consult the Oracle of Delphi

Are you prepared to command the armies of Ancient Greece to victory through ingenuity and cunning? Can you take to the battlefield, standing alongside fearsome beasts like the Hydra and legendary heroes like Heracles and lead them to their promised glory? Will you be the one to ensure that the Greek Mythos takes its rightful place in history? In times of doubt, you may ask Pythia, the High Priestess of the Temple of Apollo in Delphi for it is said she reads the threads of fate as an open book. The Oracle could be made to divine your true intent …